IT’S at the opposite end of the spectrum from the mainstream compact SUVs but Dacia’s revised Duster has a couple of things going in its favour.

The first is it’s a stylish SUV for the price of a supermini. And the second is it’s new price is around half that of a well specced similar machine from the likes of SEAT or Nissan.

Which is good news for those on a tighter budget who still crave the reassurance that a new car’s warranty brings with it (three years/60,000 miles in this case).

There is a down side, obviously. Slip behind the wheel and you’re still confronted by a big swathe of low grade plastic across the dash area, so it doesn’t score too well in the aesthetic category.

Looking for the radio controls? They’ve persevered with that quaint Renault tradition of sticking it behind one of the arms of the steering wheel, so you need to be familiar with how it operates.

And on this Comfort level model the radio had an annoying habit of not switching itself off when the ignition key was removed. Something you just expect to happen these days. 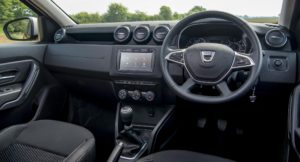 But it’s not all bad. Across the dash are five air vents – three in the middle, one either side – to get a bit more air con cooled air to you in these balmy times of late.

The level of equipment you get for your £13,195 asking price (Comfort SCe) isn’t bad at all. It comes with rear parking camera and sensors, air con, electric front and rear windows, heated electric door mirrors and a seven inch touchscreen multimedia system with sat nav, Bluetooth connectivity and SIRI ‘eyes free’. Two large dials for speed and revs dominate the area ahead of the driver, with plenty info available on the screen in between that is controlled by a steering wheel mounted button. 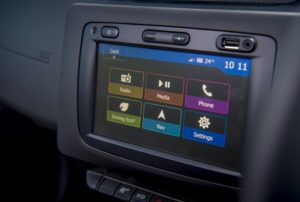 Must-haves like remote centre locking, new curtain airbags, and an anti-intruder automatic door locking system are all included, as well as alloy wheels, a leather steering wheel, and satin chrome door mirrors, side sills and scuff plates to give it a push up in the style department.

It’s comfortable enough and the revised seats are a fair improvement on those in earlier models, being a far better shape and thus more supportive. The steering wheel has plenty of adjustment so getting comfy behind the wheel is not too much of a problem.

On the road it’s not that noisy. Ride quality is acceptable, but you’ll have to work the 1598cc petrol engine to get the best out of it. 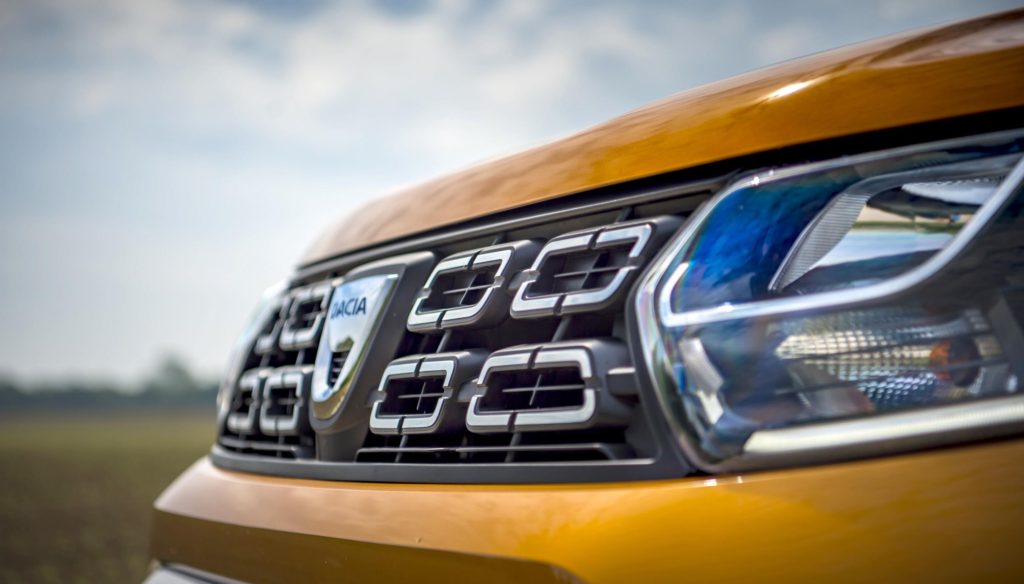 Pootling around town in traffic it’s fine and in its element but it struggles a bit to build up speed when the traffic thins out and a dual carriageway beckons. Once it gets its breath back it’s fine – but it’s no Usain Bolt.

Steering is not exactly vague but it does lack a bit of precision and feel. Duster’s running gear is borrowed from Dacia’s collaboration with Renault and Nissan, which has helped keep the cost down and provide a solid base to build on.

Dacia wasn’t introduced in the UK as a Renault division until 2012. The Duster was the first car it sold here, and it set the template for the firm’s budget range. 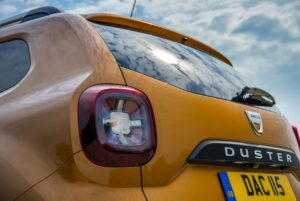 Yes, it has its limitations, performance in petrol form being another that springs to mind here, but this is no frills motoring for the driver on a tight budget.

FOR: Cracking value – nothing can rival it for price.
AGAINST: pedestrian performance.