It’s the metal equivalent of the sort of apparel a top athlete might use when training, which is quite appropriate really, because it’s a great little runner….

Suzuki’s third generation sport supermini has a new front end that gives it a look all of its own. 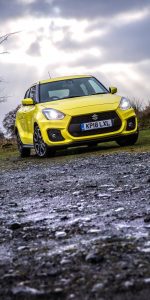 It adopts Suzuki’s lightweight platform strategy and has a kerb weight of just 975kgs – that’s 70 less than the model it replaces, or one small adult to you and me.

It’s maybe a bit evident in the over-light feel of the doors but its HEARTECT platform is a very firm and rigid base on which to build a small car. It ticks all the boxes on the safety front so no need to fret there.

Here’s another one to mull over in the bar at your local juicer.

The Suzuki Swift Sport surely has to be the Land of the Rising Sun’s attempt at mimicking the good old Mini Cooper.

It’s got the same compact dimensions, it comes as standard with the sort of agile handling that has had MINI owners drooling for years, and it’s got a high revving engine that is every bit as good in 1.4 litre form as the Oxford built tottymobile.

Power under the bonnet comes from a 140ps 1.4 litre four cylinder Boosterjet turbo engine that gives the impression it will rev for ever as you work your way through the six speed gearbox, which gives you the opportunity to appreciate in the sweet resonant note coming from the two tailpipes, particularly on downshifts.

Yes, it appears to have the lot to make it a serious rival. But there is one glaring omission – suspension.
Or any meaningful suspension travel to talk about.

If you don’t want a car with a firm ride, then look elsewhere in the Swift range, as there are a few to choose from that will be considerably more compliant. And which won’t suffer from quite so much road noise drumming through the cabin.

That inherently stiff bodyshell and that lack of travel in the bits underneath mean the wheels don’t move far off the tarmac under cornering, and it handles changes of direction in a confident way.

Involving handling, zippy performance and a decent price tag are the sort of things you weigh up when you’re hunting for a car in this category, and the Swift has them all.

So if you’re not fazed by the Sport badge on the back and you appreciate a car that gives the impression it will corner on rails and sounds as you accelerate that it has real performance potential, form an orderly queue here. We’re like that here, but not when any French tourists are around, but that’s a different story for another day…. 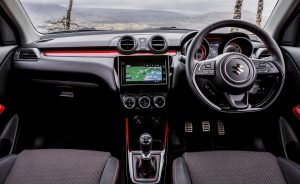 The Sport is set aside from the rest of the range by its deeper front bumper with its extra lower grille, its redesigned rear bumper and tail lights, 17 inch alloys and the twin exhaust pipes exiting the rear valance on either side. Flared wheel arches and its ‘wheel at each corner’ stance give it a certain amount of stylish appeal.

FOR: totally involving
AGAINST: firm ride