THE motoring world these days has more niches than Casanova had notches on his headboard – and BMW have added to another one.

Their neat X2 – a bit of a flattened X1 if you like – is dubbed a Sports Activity Coupe because its lowered roofline gives it a coupe–like profile but comes with the slightly raised driving position of an SUV. But only slightly, and certainly less than a similarly sized SEAT Ateca.

It’s a bit of a marmite car to some in terms of its looks, but you can’t deny it has a fair helping of on road presence, particularly in M Sport guise as sampled here. And it was a case of ‘out with the RayBans’ to counteract the orangey hue of the interior leatherwork, and the orange glow ambient panel lighting (which can be changed for other shades).

That trademark BMW double kidney grille sits atop a large lower grille to give it an aggressive stance, and it sits on a set of 19 inch M Sport alloys.

Its doors are not oversized and there’s a distinct curve to the B pillar which means your entry point into the cabin isn’t that big if you’re a big fella – or lass.

And a grumble from a front seat passenger revolved around the lack of adjustment of the seat belt. Fixed high, it fell across her neck and was particularly uncomfortable. The solution is to raise the height of seat squab to compensate which is ok if your body is of the stocky nature but not necessary if you’re taller.

BMW’s sDrive 2.0i is a very acceptable engine, with plenty of torque and it’s quick out of the blocks. There is a tendency to invoke a bit of torque steer but otherwise the handling is in the main predictable, even if the steering feels a touch light in some situations.

In this guise it comes with a seven speed automatic gearbox and is front wheel drive. Opt for the xDrive 20d version and you get an eight speed auto box and four wheel drive.

Overall it’s a well refined package, though a firmer and slightly less comfortable ride shows up when the roads are less than perfect, which is the case in most of mainland UK these days.

By dubbing it an SAC, you might be expecting a higher driving position, but in truth its not much higher than your average hatchback. The range of adjustment available makes it a very comfortable driving environment though. 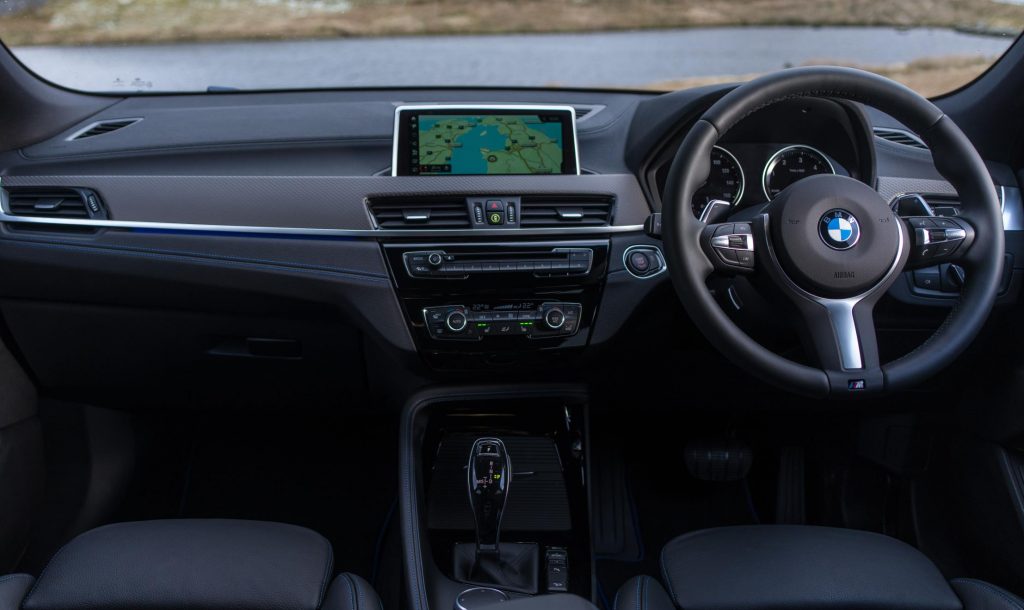 The interior has that high quality feel you’d expect from a Beemer, which still retains a look that they mastered many years ago but which is brought bang up to date with a decent infotainment system and BMW’s iDrive rotary dial located between the seats to operate the screen with its sharp graphics, and detailed satnav. And there’s a heads up display that is clear but unobtrusive dead ahead of the driver.

Headroom in the back is compromised a bit by that lower roofline and while five aboard might be a bit of a squeeze, four can travel with a decent amount of room to themselves.

The boot is a decent size and if you need that extra bit of space the rear seats are split 40/20/40.
It has similarities with its X1 stablemate, also a useful machine, but offers a bit more panache and style.