VOLKSWAGEN’S Golf-sized SUV could be just the car for the brand-loyal motorist who has been resisting the urge to switch allegiance.

T-Roc may be a late arrival to the mass rave that is the Compact SUV party, but with DNA linking it to one of the world’s best selling cars, you can be sure the entrance has been timed to perfection. All things come to those who wait, as they say….

It sits below the tidy Tiguan in the VW range, which is topped out by the rather the infinitely larger Touareg. But it’s the start of a major push by the German brand with the Tiguan Allspace and T-Cross Polo sized crossover joining the ranks.

At the lower end of its lineup, T-Roc finds itself lined up against the competent SEAT Arona and Kia’s Stonic, even though it’s a bigger proposition.

Ironically the T-Roc launched at the same time as the sleek Scirocco slipped quietly off the order books, adding credence to the claim that crossovers have taken over from coupes as the 21st century style option for motorists.

But while it has that distinct SUV styling, a very neatly packaged product, it doesn’t really make any outlandish claim to being a full on SUV – you could view it as a bigger alternative to its stablemate Golf.

You get a bit more ground clearance, and of course with the seats being a bit higher it’s a lot easier to slip in and out of – the opposite of the e-Golf that will feature in a few weeks.

It’s compact exterior dimensions hide what’s available inside. In the front there’s plenty of space for the two occupants, and the rear isn’t exactly cramped either, so it offers a decent level of comfort all round. And the boot offers a decent amount of space .

Add the optional Dynamic Chassis Control and you can soften or firm up the ride to suit conditions. 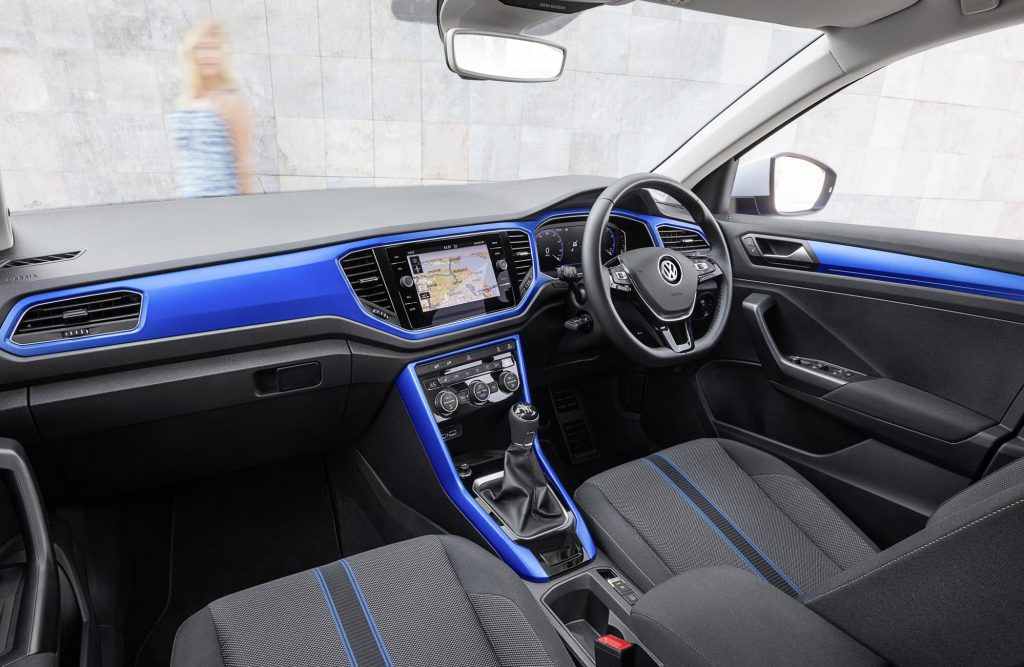 Sampled here is the R-Line 2.0 litre TSI 4MOTION which proves reassuringly sure-footed, and while it offers a little more grip in demanding conditions, it’s no substitute for common sense.. Volkswagen expect as many as eight out of 10 T-Rocs sold in the UK to be petrol powered, with the choice of 1.0 115ps TSI, 1.5 EVO 150ps TSI and the 2.0 190ps TSI.

The dash has one long straight sweep from side to side, which gives it a plain, somewhat workmanlike appearance, but below it you’ll find a clear and centrally located touchscreen, with the main instrumentation on the screen ahead of the driver varying dependent on trim. This R-Line version gets the full TFT treatment, and therefore lots of info you can dial up on the display in front of you, and variations in the display too. It’ll let you set the sat nav screen between the two main dials so your route is always dead ahead….

T-Roc has pretty decent interactivity and connectivity, and the latest in driver aids and safety kit – important for families.

And since it’s an SUV, you can add Dynamic Chassis Control, which not only has four on-road modes but two off-road settings. They hold on to gears longer and automatically activate hill descent control when you’re going down steep slopes, which you might not do that often.