THERE’S not much you can do to a Mazda MX-5 to make it a bit better, apart from maybe a little more power. So that’s what they’ve done.

Now propelled by a 2.0 litre 184ps engine (that’s 24ps more than before), the little two seater has the ability to sprint to 62mph in under seven seconds and carry on – with your knuckles turning whiter by the second – to a top speed of 137mph. The throttle response is impressive.

Its punchy six speed gearbox picks the ratios with a satisfying click, and the car displays its inbuilt ability to corner swiftly and safely. You can have a lot of fun and at sensible speeds.

RF is, though, on reflection, more relaxing to drive than the convertible and using the stubby, precise gearlever really is one of the pleasures of MX-5 ownership.

It’s 30 years since the original MX-5 appeared, and it’s still basically the same car that ramped up the cult status tag back in 1989.

Few changes have been made to the smart and stylish two seater over the years. OK, it’s roomier, more comfortable and has far more kit these days, but basically it’s just been allowed to mature over the years.

For those who want the joy of open top motoring but in a more cocooned environment, the RF (Retractable Fastback) is the kiddy.

Press the dash mounted button, and at speeds of up to 6mph, its upper roof section and rear window stow away in just 13 seconds, leaving the rear ‘fastback’ section in place to give a bit of added protection against the wind.

Its solid roof sections make it 45kg heavier than the soft-top, but Mazda have indulged in a few suspension tweaks so in truth it’s not really that noticeable.

It’s a case of dropping into the MX-5 as it sits as low to the ground as a dachshund’s dangly bits, but once you’re in you’re ready for business.

It’s obviously not the biggest cabin in the world but it’s snug and cosy for its two occupants, particularly when you switch the heated seats into use on a cold morning.

The best way to savour the MX-5 is of course top down, when you get the accompanying soundtrack of a free revving engine going about its work and a zingy exhaust note when you blip the throttle on downchanges. 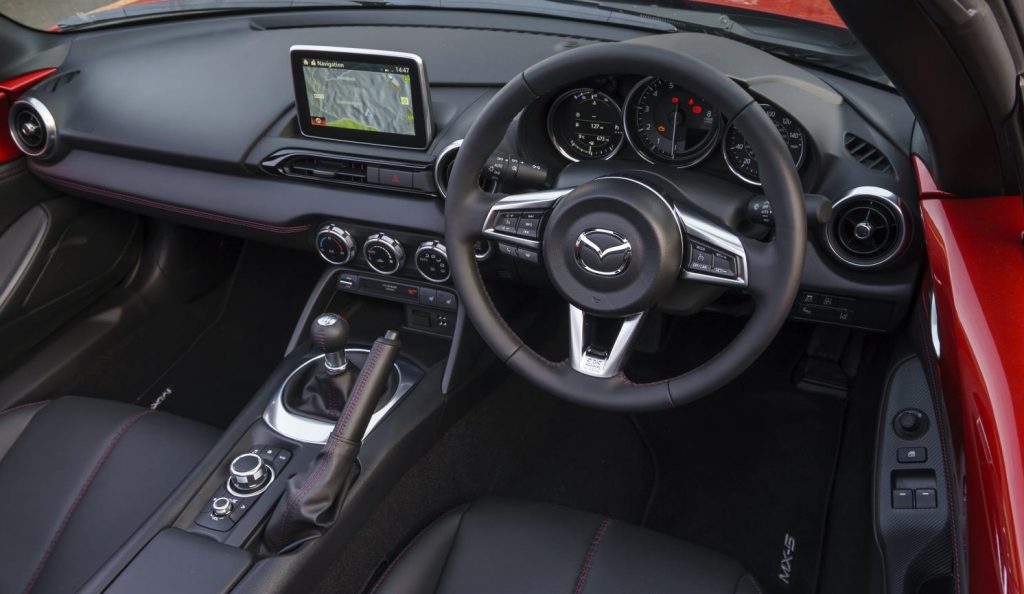 And it’s time to revel in the Mazda’s responsive and fine handling – it’s always had a reputation for that.

It’s happy enough to amble around but the quicker you go the more you get out of it. It’s a car that feels really up for a bit of spirited motoring. There a real sense that it’s cocking a front wheel as you barrel through a sharp corner, but it always feels predictable and that’s a very reassuring trait.
The RF is capable of stowing a couple of travel-size suitcases, whether the roof is up or down. But not a lot else.

Back in 1989, Eternal Flame by the Bangles flickered into life. So did the Mazda MX-5, and while the Bangles hit still gets played a bit, the instant love affair that developed between the motoring public and the MX-5 shows no sign of abating.