FORD’S Fiesta ST is the sort of car dentists love. Not necessarily to drive, but because it provides them with an endless stream of hapless victims.

The sort of car you find yourself groping around in the footwell to find your fillings. Because suspension travel is, shall we be generous here, minimal.

Not really the car for the family man, then, who would find his offspring vomiting into the door pockets after a few miles of any spirited motoring.

So, enter stage right, those who have a penchant for wearing their baseball caps back to front, the waist of their trousers halfway down their buttocks, and who like their music loud (they’ll love the B&O audio system). Cars that are a bit edgy, a bit blingy with fancy alloys are their thing and the latest ST kind of fits that bill.

Actually, it also fits the bill for those with diminishing grey hair who can recall the very first of the hot Fiestas, the XR2 of 1981, and still appreciate a small car that can roll back the years.

The first ST Fiesta came on stream in 2004 and it’s been a pretty decent success story since then.
Times change of course, and so too do cars, but the boy racer urge never dies. Advancing years just help to keep it under control.

Thankfully this one is pretty well under control too. It doesn’t throw its wheel rims at the undergrowth as the XR2 did at its Donington Park press debut nearly 40 years ago (the alloys on the ST are significantly better anchored to the car), as is the car itself to the road.

It comes with three selectable drive modes – Normal, Sport and Track, which is a clue to where the ST may find itself spending part of its life.

The third-generation Fiesta ST has an all new all aluminium 1497cc three-cylinder turbo petrol engine that manages to combine performance and efficiency together. With 200ps and 290Nm to hand, it certainly earns its ‘pocket rocket’ cachet, hitting 62mph in 6.5 seconds and powering on to 144mph if the racetrack allows. 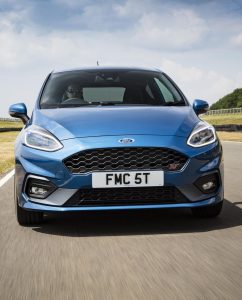 It has what’s acknowledged to be the most direct steering rack fitted to a front wheel drive Ford and a limited-slip differential – the first to be offered on any Fiesta hot hatchback. The LSD isn’t standard though but comes as part of Ford’s £850 ST Performance Pack (fitted here), which also gives you launch control (not found on many small cars) for those occasions when you want to annoy the neighbours and the local plod.

But you probably won’t want to attempt to use full throttle until you hit the third gear mark because there is a whole lot of grunt channeling itself through those front tyres. Best to keep a firm grip on the flat bottomed steering wheel.

The controls feel well weighted, with plenty of feel through the brake pedal and it has a short, slick, positive gearchange. 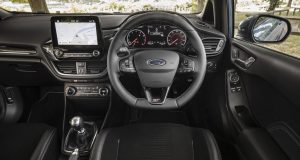 As you’d expect from a hot hatch there are a pair of bum hugging Recaro seats to keep you located in a cabin that is neatly picked out by Ford’s trademark blue accenting to the seat belts, floor mats, switchgear and lighting.

Fiesta is still Britain’s best selling car month after month but it’s now a far cry from the pokey and fairly basic little family hatch that made its debut back in 1976.