FORD’S KA has been a popular small city car among those whose budgets were a little on the tight side – a bit like the space inside.

Around town it was in its element, small and manoeuverable, but not the sort of car you’d drive to the middle of France and back, though I know someone who did undertake that very trip some years back.

But the car you’ll find in the Ford sales brochures now bears very little similarity to the original 1996 version.

It’s grown, shaking off the appearance of a pregnant roller skate to present itself as something akin to a mini SUV.

Weighed up against other cars in the same price bracket, it’s a decent proposition for city car buyers looking to upsize but without having to raid the kids inheritance too much.

What is immediately evident is that you’ll miss out on a lot on the creature comforts like satnav and a reversing camera and even auto lights, but this is a package that costs just north of 13k. Very much a budget buy, though opting for the City Pack gives you rear parking sensors, heated folding door mirrors and electric rear windows (£350). And standard fare does include manual air con, Ford SYNC, a set of smart 15 inch alloys, hill start assist, remote centre locking, Apple CarPlay and Android Auto.

The dash looks a bit spartan with just a speedo, rev counter and fuel gauge on display ahead of you. A small display controlled from the end of the left hand stalk serves up trip info like range and fuel consumption.

Fire it up and it sounds enthusiastic enough, the gravelly sounding 85ps 1.2 litre TI-VCT unit under the bonnet pumping out its adrenalin but it’s no Usain Bolt – more like the wheezy schoolboy on a cross country run, because while it feels nippy enough in the first two gears it seems to run out of steam a bit as you grab third. It’ll get you there, but it’ll take its time.

It’s still a car for round town, dropping the kids off at school , or getting to that important hair appointment on time. It’s fine for that. And it looks pretty stylish too – a vast improvement on the original. 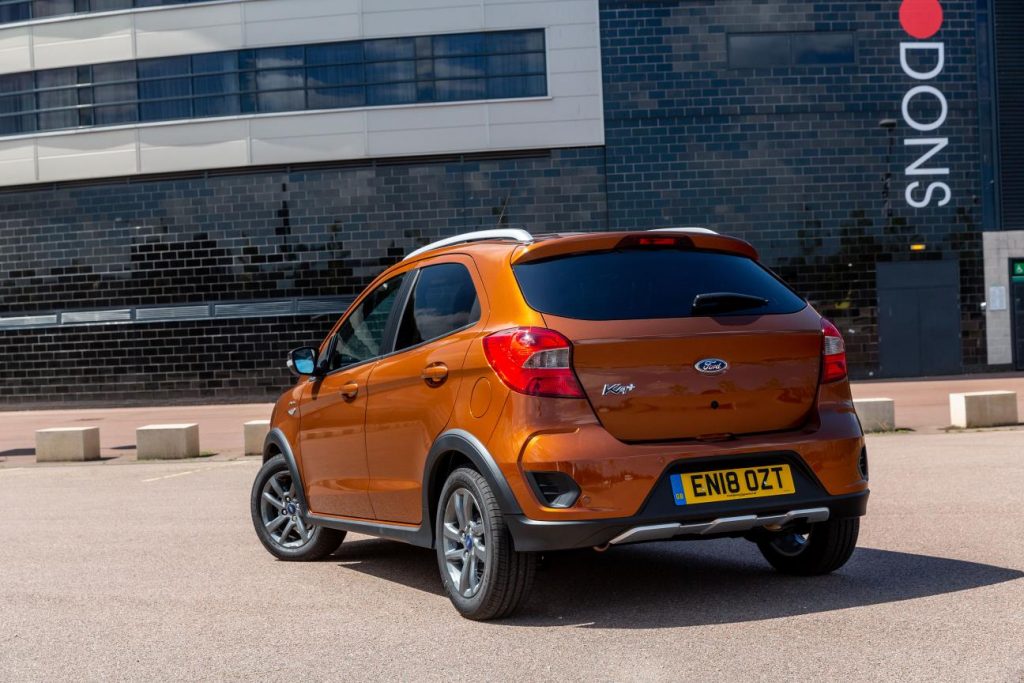 It’s built to a budget but it manages to smooth over bumps better than a lot of far more expensive cars. The body leans over in corners, and If you choose Active trim, the Ka+’s ride height is raised by an extra 23mm; that doesn’t improve the experience in any significant way and is probably only worth opting for if you live at the back end of a country lane in deepest Dorset. It does give you a better view of the road and surroundings though.

In the back, leg room is reasonable, while head room is actually quite good. You’re not going to get three six footers sitting comfortably side by side but four can travel in the car without feeling cramped.

If a stylish little Ford is on your shopping list, the KA+ is decent to drive, good value and reasonably roomy.