REMEMBER that classic scene from Only Fools and Horses where Del and Rodney realise their dream of becoming millionaires, and the Reliant Robin starts rocking?

Well, the all new Suzuki Jimny rocks too, both in the side to side sense on its soft springs and by virtue of the fact it’s a fairly unique piece of motoring architecture.

Don’t reach for the phonebook to find your nearest dealer though, as this year’s UK allocation is long sold out, such is the clamour to own one. 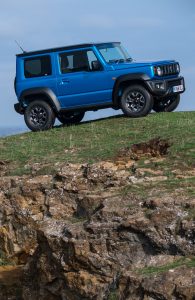 Chunkier than a Yorkie bar and a Tonka toy for big boys (and lasses), Jimny is proof that Suzuki do make exceedingly good small cars, even this go-anywhere shrunken off roader that has been a loyal workhorse for many since it was first introduced in the UK back in 1998 – 28 years after the launch of the very first Jimny in Japan.

Front on, there’s the hint of a baby Hummer, but in true Suzuki tradition, this one does miles per gallon, not gallons per mile, and while there’s only 101hp to play with and a top speed of a modest 90mph, it’s got a big heart that’ll see it tackle the sort of terrain that others would baulk at.

It’s more technically advanced than versions that have gone before though it’s still built on a ladder frame chassis and has just one engine choice – a 1.5 litre four cylinder petrol unit, which has plenty of torque at low speed – ideal for off road use. 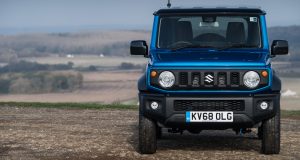 The body frame torsional rigidity is now much higher than before so although the panels are light in weight it’s still a tough – and ultimately safe – little machine.

The SZ5 has smart 15 inch alloys which on anything else would look lost, but they look mahoosive and chunky on the Jimny. You’ll find the steering is a bit over light, and you’ll be swirling the wheel from lock to lock in tight areas due to the gearing.

There’s a highish driving position and good all round visibility, and on the road it gambols along, attracting a lot of glances from other drivers and pedestrians alike.

Off road it’s always had a reputation for outperforming more expensively badged vehicles.
Open the big one piece rear door and it’ll reveal a singular lack of space for very much, unless to drop the backs of the two rear seats, at which point you’ve got a decent enough load space. Room for a couple of sheep if you’re a hill farmer, or three of four bags of Aldi’s finest if you’re not. 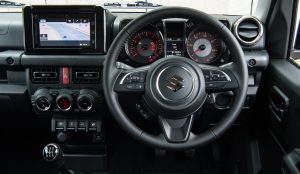 Dubbed the one and only authentic off-roader that is small and lightweight, it’s now also been crowned with a ‘game changer’ award by a leading magazine – ‘a fantastic piece of practical design that shows off the huge advantages of being light and compact’ said Autocar.

In an era of big and heavy cars, it’s one that has no peers.