YOU wouldn’t realistically expect the interior of a Skoda to have the same sort of classy premium interior you’ll find on other VW Group products. But the new Scala has.

Skoda‘s latest model to hit UK shores quite adequately sums up the Czech firm’s progress over the past few years – impressive.

The Scala is Skoda’s model to plug the gap between Fabia (small hatch) and Octavia (big hatch/saloon/estate).

The clean lines of the hatchback bodyshape means the opening to its bigger than most big boot area (467 litres) is vast, and blends in well with the overall tidy looks of the Scala. It’s a bit reminiscent in some ways to the Rapid Sportback of a few years ago, but a fair wedge more desirable.

The headlights are narrow and tapered and along with the upright radiator grille give the Scala a distinctive front end. It’s also the first Skoda production model in Europe to to have SKODA cross its tailgate instead of the brand logo. You really can’t miss it.

What you will miss when driving are what are dubbed ‘animated rear indicators’ – they sweep to the outside edge when being used – an Audi-like touch in a car a few class levels below.

It’s got a Tardis-like interior, despite being built on the underpinnings that also play host to certain superminis in the VW group stable like the Polo. Ironic, in that the Scala has the Golf in its sights for sales which is built on a slightly bigger platform.

The dash deserves mention, its straight functional lines giving it a smart user-friendly appearance, and there’s an uncluttered but user-friendly feel to the instrumentation.

As well as a good level of standard specification, there’s a comprehensive package of active and safety features so everyone aboard is as well protected as they can be. And there’s plenty of space for a family of five, as well as a decent amount of storage spaces.

Its main competitors for your hard earned cash are the Ford Focus, Kia Ceed, or Hyundai i30. Scala has a reasonable pricetag and with badge prejudice becoming ever more pointless, it’s a sensible option.
In SE trim, the Scala comes with AEB, lane-keep assist and parking sensors.

Three engines will be available, with four different outputs, with either five or six-speed manuals or a seven-speed DSG. A 1.0-litre TSI 3-cylinder petrol that comes with either 95 or 115PS, another 4-cylinder petrol 1.5 TSi with 150PS and cylinder on demand technology (sampled here), or a 1.6 TDi diesel with 115PS. 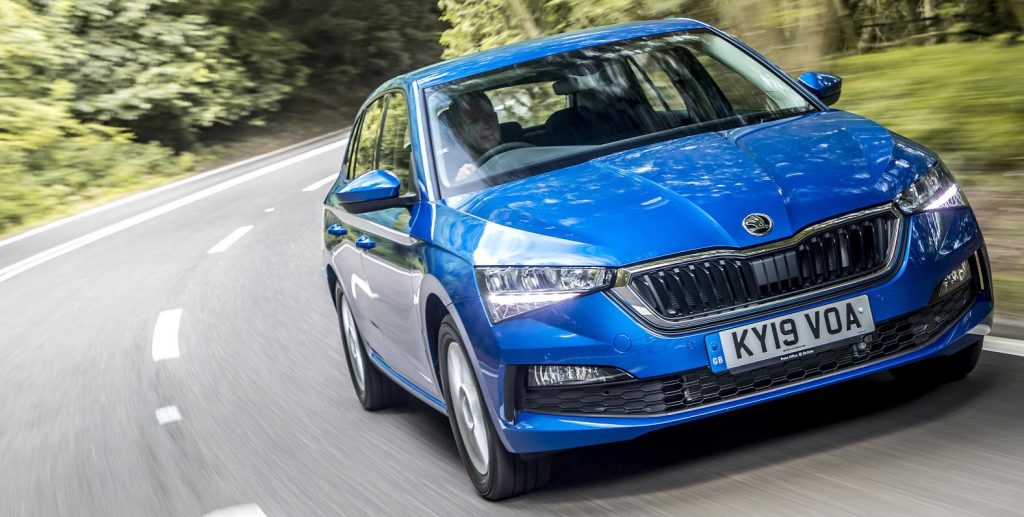 It rides well, goes, stops and steers exactly as you’d like it to. It’s quiet enough in the main, and the steering is unlikely to trouble your shoulder muscles.

The 147bhp four-cylinder with a DSG feels nippy rather than fast and the DSG is smooth enough – a well set-up driver friendly car.

As well as the spacious boot, you get split-fold rear seats, generous space for rear passengers and wide back doors – Skoda knows what practical means, and it plays to its strengths here.

And practical means those neat little touches like the ice scraper inside the fuel filler flap, the A-frame ticket holder, the oft used brolly in the drivers door, and an electric tailgate with a Tip-to-Close function.