THE push is on to make the world a cleaner place – but the good old internal combustion engine is going to be plying its trade for some time yet.

That’s Mazda’s summing of the current situation, and they believe that until more renewable energy sources replace dirtier forms of fossil fuel and until charging times and charging infrastructure have dramatically improved, the engine as we know it will still be playing a major role for the next decade.

Or maybe not quite as we know it. Mazda’s development of their Skyactiv power range now sees the next step in Skyactiv-X, which is Mazda’s own unique combustion method which combines the benefits of both a spark ignition and diesel-like compression ignition unit.
Called SPCCI (spark controlled compression ignition) we won’t get too technical here, but its major benefits are more torque and up to 20 per cent better fuel economy – the latter of course depending on how you drive.

In theory, then, a decent alternative for those who prefer petrol engines, with the benefit of diesel.

The latest Mazda3 features all this new technology, as well as Jinba-Ittai – the company’s philosophy that car and driver should have a bond, like a rider has with their horse, only in this instance the driver with his horsepower.

It might sound on first acquaintance as marketing codswallop, but the 3 is a car that successfully cossets you in a way that lends some credence to the claim. It has a smoothness and fluidity of movement that is exemplary, I think, in this sector. It flows through bends on twisting roads without unsettling you behind the wheel, and makes a decent job of soaking up the potholes that would have many a cyclist in the nearest ditch, along with their bike.

There’s comfort on offer in all seats, and it benefits from having one of the smartest, well finished and well laid out dashboards this side of any luxury brand you care to mention. 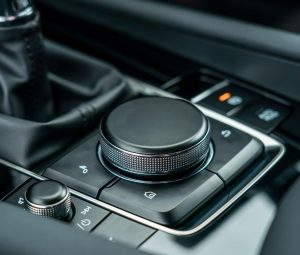 It’s not overpopulated with buttons and switches, and its BMW-like centre rotary control and surrounding buttons give you control over the shallow and wide main screen – the ‘go to’ place for information.

A tell-tale on the main speedo will show you if you’re over the limit for the road by highlighting a red line between what the speed should be and what you’re actually doing. A neat and unobtrusive touch that could save you many pounds!

There’s a decent size boot can swallow up a good number of cases or shopping bags.

Performance has an accent on efficiency rather than the bipolar experience you get with some cars. It runs long in each gear, never sounding strained, and while you might think it’s taking a while to build up a head of steam you suddenly notice the speed you’re travelling at might be more than you actually anticipated and more than is legally acceptable.

Trim levels are SE-L, SE-L Lux, Sport Lux, GT Sport and GT Sport Tech, with a choice of manual or automatic in all cases, with prices starting at £20,595.

Skyactiv-X adds the option of an all wheel drive model in hatchback guise. And all are well specced up with the essentials of modern motoring, as well as a raft of safety features like Cruising and Traffic Support, radar cruise control that keeps the gap between you and the vehicle in front constant, and a heads-up driving display.