FOR all the knockers who smugly spout the line that French cars are all style and no build quality, here’s a bit of advice: bite hard and swallow.

There’s no denying the all new Peugeot 508 SW is a very smartly styled estate car – something the French have proved quite adept at over the years, although on the debit side there have been the occasional howlers along the way.

But this is smart with a capital S. In profile it looks long and low and sleek, and getting in you realise that yes, it is quite low to the ground.

On looks alone it promises much and if you turn off the radio and your ears can block out the fairly well subdued clatter from the 1.5 litre diesel unit under the bonnet you’ll notice a distinct lack of any other extraneous rattles, which is a good start. It effectively disproves the long held theory that Pierre and his pals can’t screw a car together properly.

There’s a lot to like about the SW. The subtle interior lighting at night, the piano key controls for major functions in the centre of the dash just below the display screen, the sweeps and curves of the dash with its carbon fibre effect finish.

This GT Line version sampled here has a large sunroof which the taller amongst us will find a bit of a hindrance to getting the ideal position behind the wheel as it encroaches into the available headroom. You might end up reclining the backrest more than you want to, but the saving grace is there’s plenty of rake and reach adjustment in the steering column, and you’re always able to see the ‘above the wheel’ main instrumentation clearly.

Some might think they’ve over-egged the omelette in the dash area with Peugeot’s now signature piano key control switches and an interchangeable TFT screen that has displays that you’re probably not going to bother with after the first two weeks of ownership, but the use of piano black and carbon fibre panelling gives it a real distinctive feel.

Manoeuvering a car that’s 4.77 metres from nose to tail into a parking space is greatly assisted by the park sensors and rear view camera, which also has a top view so you can pretty well be inch perfect.

I came pretty close to losing my wife of 42 years during the week. I mean, have you seen how big the boot is? We did a week’s shopping and then had to go without food for two days because we lost some of it……

The downside of the neat tailgate is that the keyfob opening button only lifts it half way – you need to give it an extra shove to fully open, but at least there’s no chance of your head connecting with it as you load up. 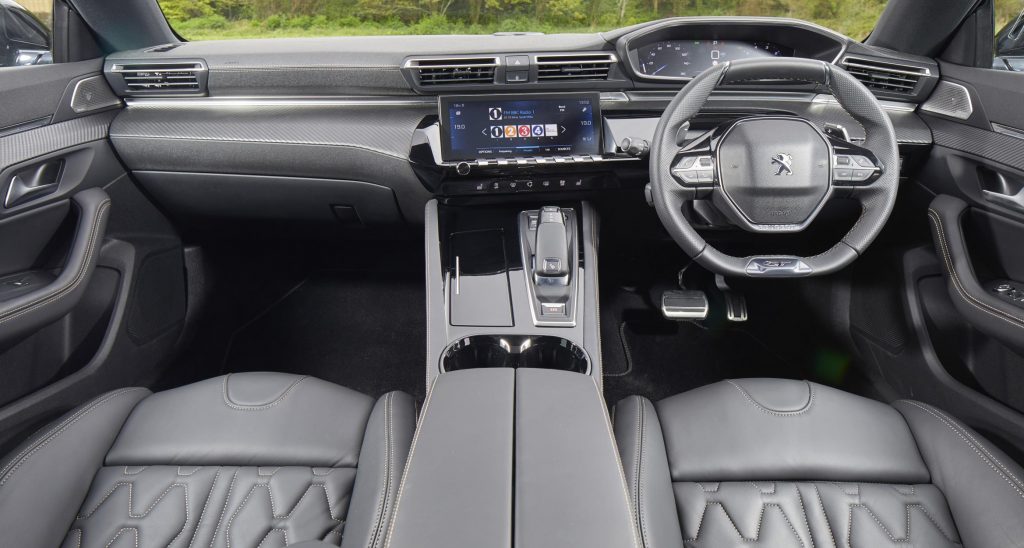 The 1.5 diesel model we’ve been running the rule over tipped the financial scales at a shade over £32,000 – and then piled on the pounds (literally) with over £4,000 of carefully chosen extras like bigger alloys, a premium high fi system, nappa leather, night vision and a few other additions.

What we have here is a car that has an altogether classier and more upmarket feel than its predecessors; one which is going to make people have a bit more respect for the lion on the bonnet.