ASPIRATIONS. Everyone has them, and when it comes to cars, there’s guaranteed to be one out there that will meet your needs.

Audi’s Q8, the flagship coupe version of their big Q7 SUV, is such a car. Large and luxurious, it won’t see much off road action, if any, but then few SUVs do in any event.

It’s definitely a car to be seen in. The sleek body is lower, wider and shorter than its more practical stablemate, and it’s also a lot more aggressively styled with Audi’s latest eight-sided grille, swoopy headlamps and wide wheelarches which they say were inspired by old Quattro rally cars. Now that was a TRULY aspirational car.

Round at the back, there’s a full-width LED lighting strip, roof spoiler, and a ‘fastback’ tailgate that cuts down on the useability of the boot. Q8 is strictly a five-seater, so no third row of seats as in the Q7, and has a more upmarket, even opulent, feel than its stablemate.

So, eye catching. And so are the available colours with the options list offering Dragon Orange and Galaxy Blue to set it apart from the crowd.

All variants feature quattro four-wheel drive, along with an eight-speed auto gearbox. Inside, the interior bears more than a passing resemblance to the latest Audi A8 limo, complete with the twin-touchscreen MMI dashboard and Audi’s Virtual Cockpit instrument/info pack.

There’s a big swathe of piano back stretching from one side of the dash to the other, carefully concealing much of the information you’re going to need, until you press the starter button and it all lights up for your personal use.

Neatly set above are the slim air vents which you hardly notice at first. This is an interior then that has been very carefully thought out with more than a touch of class to it.

The whole fascia is dominated by the MMI Touch dual-screen infotainment set-up used elsewhere in the Audi range.

The top 10.1-inch screen serves up the infotainment, the lower 8.6-inch one taking care of the climate control and car set-up options. It also features handwriting recognition, but if you’re right handed it’s awkward to use.

There’s a wireless phone charger in the centre armrest, with a USB connection to hook up your Apple CarPlay or Android Auto. Settling down to an amble of the motorway, it will drop down one of its eight gears when you encounter an incline but progress will remain serene, the change down barely perceptible such is the quality of the gearbox, so there will be little to disturb your thoughts behind the wheel.

There’s a tendency sometimes to not be as instant off the mark as you’d like. For the thick end of £82,000 you might reasonably expect instantaneous response, which you can dial into the equation buy fiddling with some of the settings on offer.

But, after a brief delay, there’s no denying there is a whole lot of power available to your right foot, and the Q8 proves to be an effortless overtaker.

All Q8s sold in the UK come on advanced adaptive air suspension, and on its softest of the settings it shows little tendency to wallow through corners.

The ride quality is good for such a big vehicle but it can feel jiggly when the surface is anything other than super smooth, despite the impressive suspension set up under the big body. In the main the road manners are good and you’ll be wowed by the levels of refinement, and the sheer volume of ambient lighting around the cabin at dusk. 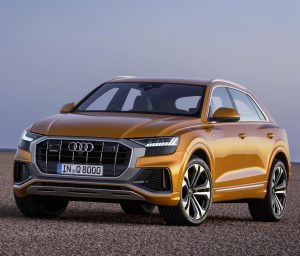 The 48-volt electrics make the mild hybrid tech possible in the diesel version. There’s a lithium-ion battery situated under the boot floor, which regenerates under braking.

When coasting between 34mph and 99mph the diesel engine’s stop-start tech cuts fuel and progress is maintained using the belt drive starter motor.

Large vehicles tend to take up a lot of space in a car park and while cars have got progressively bigger, parking spaces have not. Be thankful then for a comprehensive parking package aboard the Q8, making slotting into what’s available less of a buttock-clenching escapade at it might otherwise have been.

It’s a car that will have a relatively small customer base but one which is a truly aspirational vehicle. Luxurious, and very up market.

Q8 on your drive? You’ve arrived.