CUTESY looks are fine but when the engine under the bonnet is wheezier than a fat lad on a school cross country run you begin to question the wisdom of those buying it.

But now, thankfully, there’s been a ‘eureka’ moment and the Vauxhall Corsa now has a small engine that can keep up with the fit boys.

It used to feel like there was barely enough of a spark to light a boy scout’s fire at a jamboree – disappointing to experience such a lack of urgency in a car that feels so well put together and finished.

We’re talking about a car that wouldn’t get to 60mph until 13 seconds had ticked by and in this day and age that’s a bank holiday break.

But no longer. The latest Corsa – designed and built pretty well from the ground up in under two years by new owners PSA on the same platform that underpins the Peugeot 208 (watch this space) and Citroen DS3 Crossback – is a much more acceptable package.

The three pot 1.2 litre engine under trial here is a very decent improvement, boosted by a turbocharger. It’s the best small engine Corsa I’ve ever driven – and I’ve driven quite a few. It picks up surprisingly well no matter what gear you’re in. There’s also a ‘basic’ 74bhp version – as well as a lengthy list of trim levels on offer.

You get a well sorted little supermini whose handling comes down on the predictable side of the fence – and as such you’re unlikely to end up driving through one after losing control.
Well sorted is probably the phrase to use here.

Almost every element of the Corsa’s cabin is new, including a re-designed and smarter instrument panel and dashboard, though for someone on the tall side legroom could be a bit better behind the wheel.

There’s a seven inch colour touchscreen and the sat nav has European coverage, handy if we’re ever allowed to leave the island again. Apple CarPlay and Android Auto also feature. 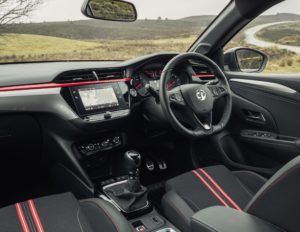 You’ll notice a small indicator ahead of you on the main panel to show if you’re over the speed limit at any given time, and which pulsates as a warning.

In this SRi model there’s a predominance of red trim, across the dash and with two big stripes down the seats. They are comfortable but you’ll notice a lack of support as the Corsa negotiates bends and corners, where you end up rolling with the body. And you’ll notice road noise if the surface is anything other than perfect.

The electric assistance to the power steering makes it very light indeed and so manoeuvering the Corsa is hardly a taxing affair.

The doors open wide so there’s never a problem getting in and out, even to the rear although obviously there’s no point trying to pour Great Aunt Constance in there unless her osteo-arthritis is having a good day.

It’s been in the top 10 sales chart for an awful long time, appealing to young buyers and families alike. I doubt that’s likely to change.