THE car is viewed as one of the biggest technical improvements in our lives in a million years of evolution.

By replacing the four hooves of a horse with four rubber clad wheels, the world – and all the socio economic groups in it – suddenly had a high degree of freedom.

Now we’re embarking on a search to find a better and more planet friendly way of moving us all around.

As someone fairly well versed in going abroad to drive right hand drive UK spec cars in foreign countries, the roles have been reversed here and I find myself in a German spec left hand drive plug-in hybrid electric Kia on UK roads.

All well and good, once you remember how to convert kph to mph as the main speedo is European (there is a digital readout in MPH as well when you dial into the onboard computer), and the seat belt comes at you left to right and not right to left as has been the case since the examiner put a tick in that ‘instant freedom’ box on your driving test.

Kia’s Ceed Sportswagon PHEV fits into that tranche of cars that have been hit fairly hard by the mass move to SUVs but if a more traditional estate is your thing then it’s worth a look. 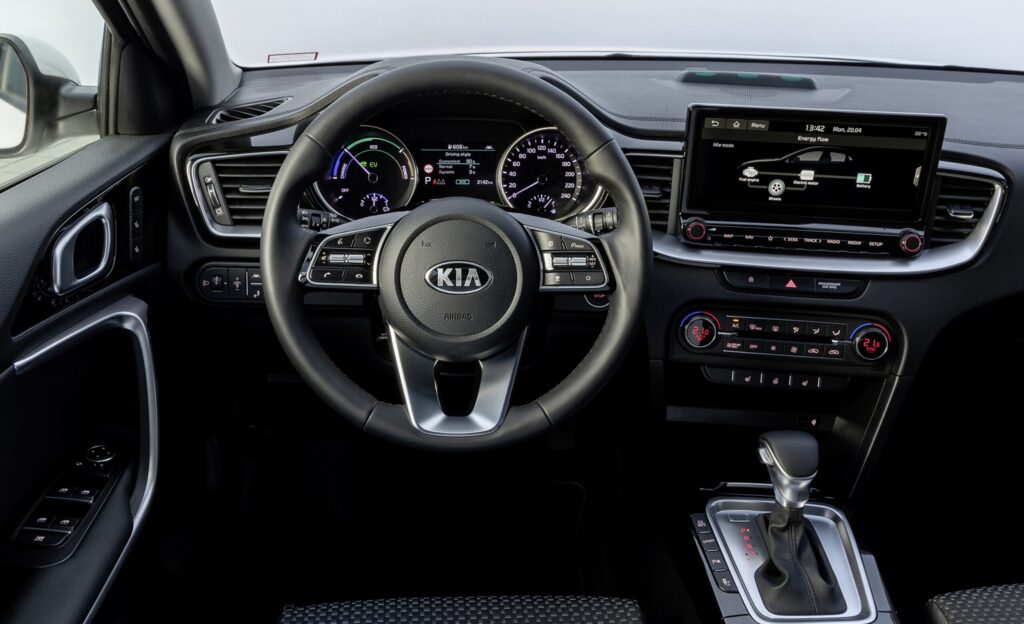 There are petrol and diesel options, but this is the first time low emission plug in power is offered in the Ceed family.

The powertrain here boasts an 8.9kWh battery pack, 44.5 kW electric motor and a 1.6 litre GDi engine, pumping 139bhp and 195lb/ft of torque. Forward impetus is therefore acceptable and doesn’t need to be measured in calendar terms.

The charging port is positioned on the passenger side front wing on UK spec cars and it’s capable of travelling up to 35.4 miles (city range) on zero-emissions electric power – so, the majority of daily drives and short commutes on electric power alone if you’re light on the throttle. Recharging the battery pack using a 3.3kW charger takes just over two hours. 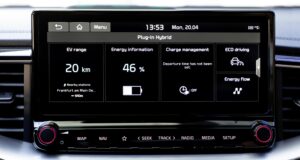 It’s equipped with a charging indicator, a visual aid to tell owners that their car is charging or when the battery is fully charged. Its location on top of the dashboard means you can instantly clock the car’s state of charge at a glance from outside the car (for instance, when it is parked on your driveway at home and you haven’t left the house yet).

Standard regenerative braking technology allows the PHEV to harvest kinetic energy and recharge the battery packs while coasting or braking, which adds to the efficiency.

Kia’s new Virtual Engine Sound System is included, which has an audible warning system which activates in electric-only mode at low speeds or when reversing. The system generates virtual sound levels of up to 59 dBA to safely let pedestrians know there’s a car around.

Inside is typical Kia. Neatly packaged with a more dominant centre screen, nicely damped controls and soft plastics dotted around. 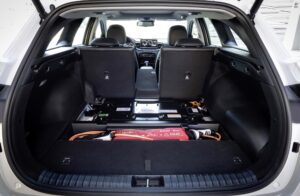 Getting a decent position behind the wheel won’t be a problem, whatever your size, and relatively thin windscreen pillars ensure it’s easy to see out at junctions. But over-the-shoulder visibility is quite restricted, and you’ll be grateful that a rear-view camera is fitted as standard to help with reversing.

No Ceed Sportswagon is poorly equipped. So you don’t need an options list.

It prompted one of my neighbours to casually enquire what it was like, which doesn’t happen very often. I told him it was a perfectly good car. Because it is.