YOU can’t say you aren’t spoilt for choice if a compact crossover is on your wish list.

And when you start looking there’s very little chance you’ll overlook the latest Peugeot 2008 with its choice of virulent paint jobs.

Fusion Orange metallic is certainly one that stands out in a crowded car park as foolhardy shoppers attempt to cram their boots with more toilet roll than any sane person would need at the start of Lockdown 2.

There are cars ably suited to that task but maybe not so the 2008. It’s a decent size but we’re talking industrial scale purchasing here, so we’ll leave the morons to it and concentrate on its other abilities.

If you’re looking for something that’s a bit more stylish than the rest and has a quality finish to it, then the relatively high price tag might not put you off.

This 2008 is the second generation of their supermini-sized SUV and shows that the reputation Peugeot used to have for questionable fit and finish has been well and truly banished.

With its distinctive exterior styling and ultra smart cabin the 2008 errs on the premium brand side of the buying equation in terms of looks, rather than the mass market appeal of some others.

Inside at dusk you’ll find bright light green mood lighting strips across the dash and the doors which are highly distinctive and highly noticeable.

Someone in the design studio must have been hitting the Ricard pretty hard one lunchtime to come up with such an alternative interior. 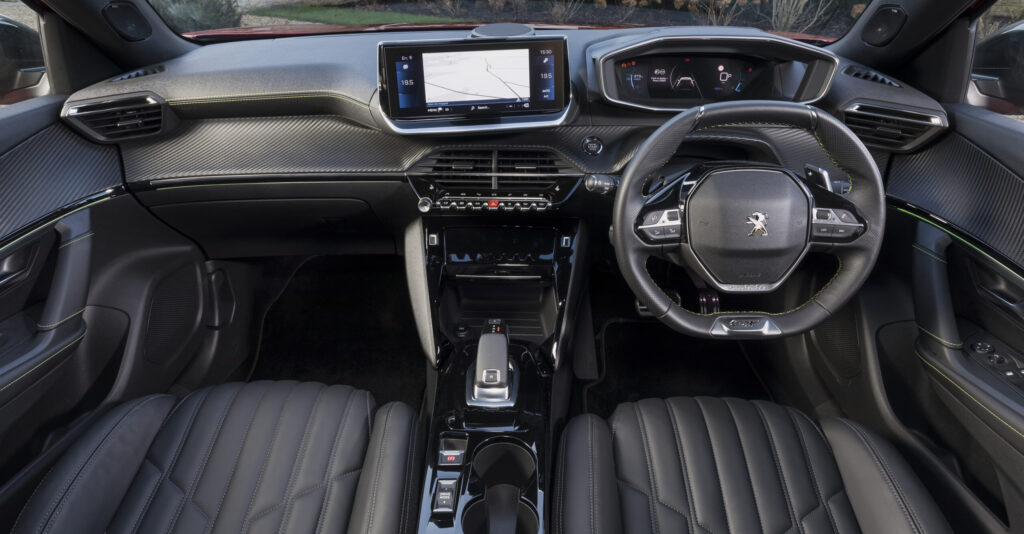 There are two big infotainment screens incorporated into what is a bold design. The first is a fairly conventional centre touchscreen that is used to operate everything from the sat-nav to the heater.

The second screen with its 3D effect is more interesting and replaces conventional instruments behind the steering wheel. It has visible depth and you can see a basic road layout (minus street names) in the background depending on which screen you select. It’s fully customisable with a variety of animations when you switch between views but the controls take some time to get used to.

Petrol power here comes from a 1.2 litre PureTech unit which is available with three output levels – 100bhp, 129bhp sampled here with a six speed manual box, and 153bhp with an automatic box.

All offer decent economy, and with the 129bhp it’s certainly got punchy performance, proving quicker off the mark than you might reasonably expect, and well able to keep up with the traffic. If you need even better economy there’s also diesel power available courtesy of a 1.5 litre BlueHDi with 101bhp. Newest offering is the all-electric e-2008 with its 200 mile range – smoother and quieter than its fossil-fuelled stablemates.

It’s a fun car to drive around, but press on and you’ll notice the underpinnings aren’t at times quite up to the task of dialling out any unwanted body roll.

That trademark sporty small steering wheel you find on Peugeots gives you a good view of the instrumentation, although some may find the seating position lower than expected in this class of car.

And while it had a lighter than appreciated feel around town, the steering gets heavier as the speed ramps up and thus has better feel.

It comes with lots of kit, which might help smoothe over the pricetag.