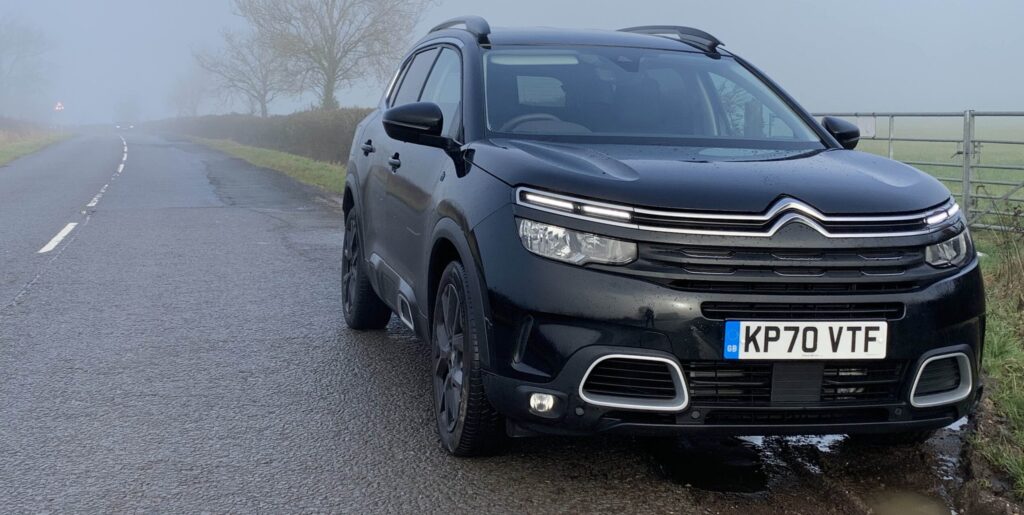 RENOWNED for putting the quirk into car design, Citroen have scored again with their C5 Aircross SUV.

Who else produces a car that has what looks like a footstep in the door sill, or a large signature chrome C marking the sweep of the side windows?

No real surprise then that the two models that are the Plug-In Hybrid offerings in the range come with the moniker Flair and Flair Plus. Because there’s plenty of that on board..

This is archetypal Citroen – loads of comfort, quirky looks and of course that typical supple ride quality, which on first acquaintance might be deemed a bit out of kilter for a large SUV.

But we don’t have four wheel drive here so there will be no off-road shenanigans. Buyers will doubtless be looking to buy into that fabled Citroen ride quality, which you’ll get. But you’ll also be investing in a car that while fine round town, will display body roll in corners that will dissuade you from too much country lane heroics. While it grips well enough, it leans over in bends more than any rival we’ve sampled.

The steering too is fine around town, but its very light and doesn’t weight up enough to provide reassurance or involvement in bends or at speed.

So, a pillowy soft SUV. It’s at its best on A-roads and motorways, where it’s one of the most cosseting SUVs you can buy.

It’s up against some serious opposition, as the large SUV class contains heavyweight performers like the Audi Q5 and BMW X3.

The plug-in hybrid here combines a 1.6-litre turbocharged petrol engine with a battery pack and electric motor to send a total of 222bhp to the front wheels through an automatic gearbox. The electric motor has enough poke for the C5 to keep pace with traffic, and the all-electric range is 31 miles. A prod of the throttle will wake the petrol engine, and when petrol and electric power working together, they give you brisk acceleration.

The C5’s quirky styling means it has small side and rear windows with thick pillars at the back, which make it trickier to see out of than some of its rivals with bigger windows.

This is Citroën’s first plug-in hybrid and the first model in the brand’s electrification offensive, which will see all Citroën models offered with either a battery electric (BEV) or plug-in hybrid (PHEV) variant, in addition to internal combustion engines (ICE), by 2025.

You can optimise the C5 to your driving needs: Electric means the car uses only the battery-powered electric motor, resulting in a quiet and smooth drive with zero exhaust emissions, offering a range of up to 31 miles; in Hybrid the car chooses the best mix of electric and petrol propulsion to suit the driving style whilst optimising efficiency; and Sport  combines the power of electric and petrol motors to offer outstanding performance.

Citroën has partnered with POLAR, the largest and best-performing public charge network in the UK, to offer UK customers buying a new C5 Aircross SUV Hybrid a six-month free subscription (normally worth £7.85 per month) to the POLAR service, which offers a good availability of charging points – with many not incurring any extra per-kWh charges.