IF the carrot on a stick of giving your car a 300 plus mile range in exchange for a £5 overnight recharge on your household electricity gets your attention, read on.

That’s the claim of one of the big energy giants, with a few provisos thrown in, but it certainly makes a compelling case for electric car ownership.

Particularly when the car in question is Skoda’s ‘pretty damn good’ Enyaq iV – a large SUV that rivals some of the classier ones out there, and which offers loads of interior space and a pretty decent range between plug ins that should effectively put to bed the range anxiety that was the absolute bane of earlier electric cars.

Plugging in rather than pouring gallons of petrol into a tank is slowly but surely finding more favour, even if the charging network across the UK is harder to come to terms with than the small print on your average utility bill.

The Enyaq claims to travel up to 333 miles between A and B, which is a decent trip in my book. Whether its regularly achievable depends on your driving style and traffic conditions.

The 60 version has 177bhp on offer and the 80, as sampled here, 201bhp. Acceleration figures between the two don’t differ much, because the 80 has a heavier battery pack to cope with, but you’ll hit 62mph in under eight and a half seconds. There are quicker electric cars in this class out there, but they’re more expensive.

We found the Enyaq to be one of the best riding EVs we’ve tested, with lovely balance and poise, the low centre of gravity helping control body movement. 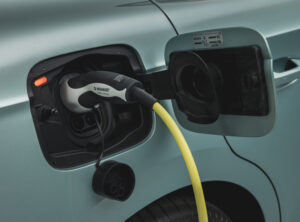 The steering has good feel and there’s quick and smooth responses to your inputs from the wheel, which tempts you to press on when conditions allow. There’s grip aplenty, even more than one of my ex bosses on his wallet when it was his turn to cough for a round.

In the main it’s relaxing to drive, with as you’d expect very little interior noise. A large 13 inch touchscreen in the middle of the dash controls most functions, leaving the small pod ahead of the driver to display speed, range, and proximity to the vehicle in front.

The drawback with touchscreens is they tend to be distracting to operate when you’re driving, but at least in the Enyaq the icons are large and clear and thus are easy to find.

Seats are big and supportive, and the overall feeling in the cabin is of plenty of space for the occupants. 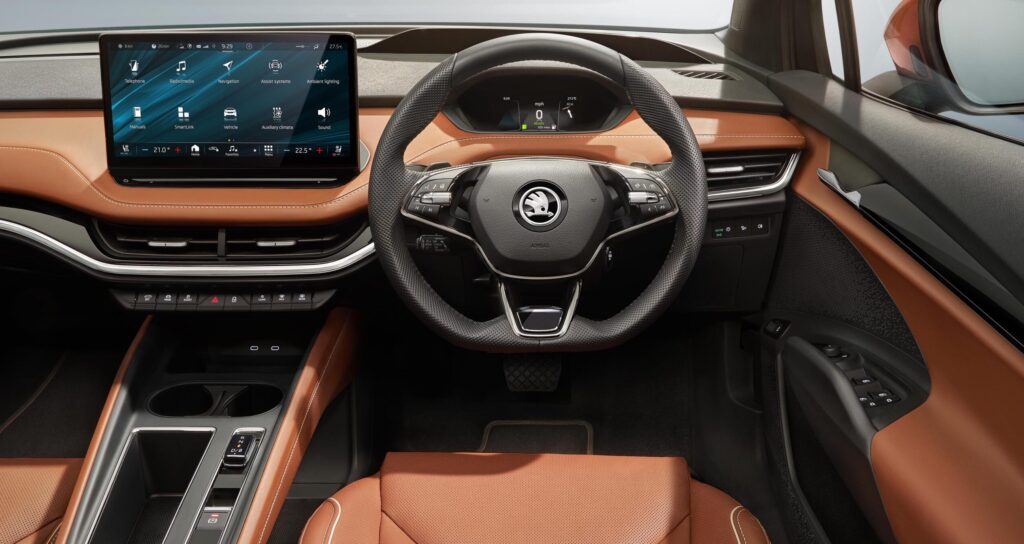 In fact, the quality of the Enyaq’s interior shows how far Skoda have progressed.
It feels really well screwed together and there’s plenty of decent quality plastic on the dashboard and the insides of the doors, which have a neat way of pulling them shut. In the Suite version sampled here, large parts of the dashboard are trimmed in artificial leather for a classier finish.

All versions come as standard with a Type 2 charging cable, which you can use to charge at home using a regular 7kW wall box. A full charge (0-100 per cent) takes around 9.5 hours for the 60 and 13 hours in the 80.

Which I think takes us back to where we began.