IT might have a name that harks back to the pastimes of the landed gentry in the last century, but this Arteon is bang (sorry) up to date.

A shooting brake of old was designed to carry all the necessary equipment for the hoorah Henrys to blast any wildlife that was unfortunate enough to catch their eye.

Thankfully that’s a thing of the past in most of the UK, but the name has returned with Volkswagen’s Arteon, a car that combines the good looks of a coupe with the load-lugging capability of an estate car.

It’s shapely sloping roof means there’s a bit less space in the back but there’s still an impressively long load area of 2,092mm – more than enough to accommodate your double barrelled Purdey should you feel the need for a spot of bank robbery.

Under scrutiny here is the 1.4 TSI e-Hybrid, the 1.4 petrol engine being boosted by an electric motor that in itself is powered by a small 13kW battery tucked away under the boot floor.

With 215bhp available it’s no slouch, reaching 62mph in just under eight seconds and of course it’s able to travel on electric power alone for up to 39 miles when fully charged.

The soft suspension of the e-Hybrid gives it a feeling of wafting along and it copes well with the changes of surface on town and country roads, aided by a steering set up that is light to the touch but which controls the direction of the front wheels in an unflustered and reassuring way.

Plenty of steering wheel and seat adjustment means any size of driver can be comfortably seated, and in the back it really scores over its opposition – the amount of space available is vast. The dash has been re-invigorated to bring it close to its Touareg SUV stablemate. Volkswagen’s 10.3 inch digital cockpit is standard on all versions, and you can specify a head up display. 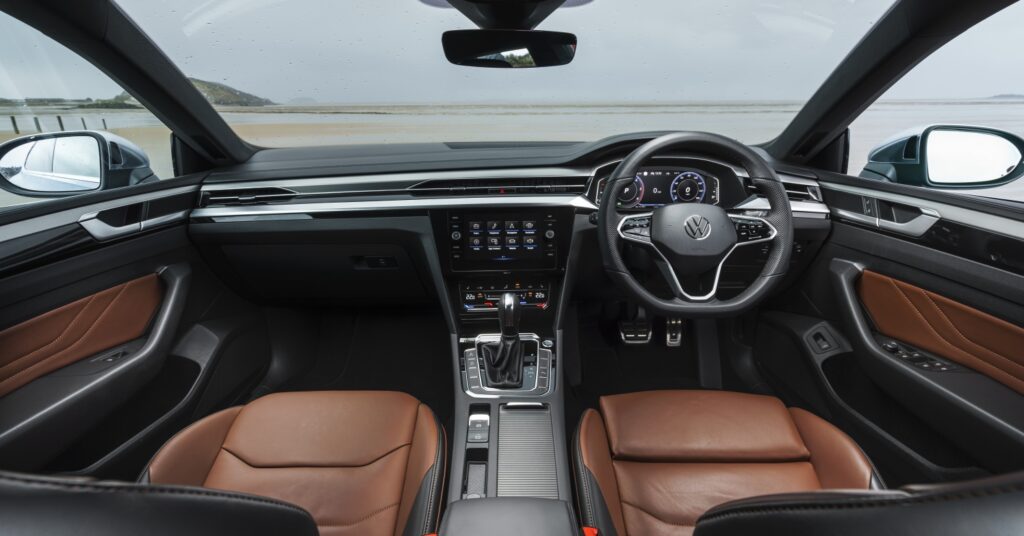 Wood trim inserts across the dash on the Elegance model sampled here give it a different feel and there’s neat stitching on the seats. It makes for a cleaner and fresher look.
All models get a new digitized control unit for the air conditioning, with touch panels and sliders finished in high gloss black performing the functions.

There’s plenty storage space for all your needs with a couple of big cupholders, a useful space below the heater controls and extra storage under the middle armrest. That’s on top of a big glovebox that nobody puts gloves in and door bins that’ll mop up anything else and keep it safe.

As well as potential bank robbers and the hunting/shooting/fishing fraternity, the Arteon Shooting Brake will also find favour with those of us who lug our holiday around behind us. The Caravan and Motorhome Club made in a class winner in their Towcar of the Year awards, praising its stability and comfort, with the steering, sharp handling and tight turning circle drawing special praise.