YOU’D have to concede that a car with no central B pillar looks like it might be as strong as a pre-school tug of war team. Our picture here might even lead you to that conclusion. 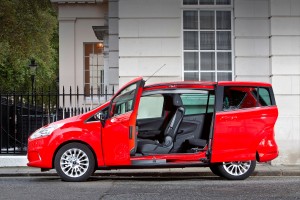 But as one of Ford’s sages pointed out during the UK launch of their latest model, no one drives with their doors open, so there is no question of any safety issues or lack of rigidity.

And the B-MAX certainly lives up to that claim.

It can offer you unrivalled access – a clear 1.5 metre unobstructed opening, in fact – and anyone who has ever tried to wiggle a baby seat into the rear of a car will be full of praise as to how easy it is to accomplish in the B-MAX.

But they’ll also be thankful that once the sliding rear door and the passenger door are shut and locked in place then baby – and anyone else inside – are as safe as they would be in any other car. Side impact protection is in no way compromised, and those sliding doors come into their own in tight parking spaces. Getting in and out is a cinch, even for plus six footers (that’s height, not the number of shoes you have to lace up).

The Ford Easy Access Door System was developed following an innovative project in which engineers “went undercover” to observe drivers in their daily routine – going shopping or picking up their children from school – to understand exactly what customers wanted in a compact car.

The end result is Ford’s vision for a premium compact multi-activity vehicle, which gives you outstanding space and versatility in a neat, stylish body. 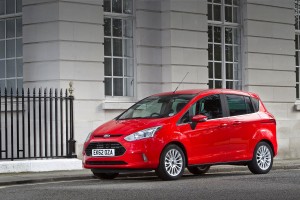 It also displays excellent driving dynamics – the sort of handling qualities that have made the Fiesta and Focus so popular and once word gets out Ford are confident of achieving 60 per cent of sales through ‘conquests’ – a mix of up and down sizers. There is a little more body roll as you’d expect from something a bit taller but it’s all nicely contained.

The engine choice is varied. I tried the 1.6 diesel but was ultimately swept away by the brilliant 1.0 litre three cylinder EcoBoost. It never feels underpowered, cruises effortlessly and yet still returned a healthy 43mpg on our run through the more acceptable parts of Essex.   A remarkable little engine, offered with 100PS or 120PS outputs, which whirrs away happily under the bonnet and is never intrusive.

It can automatically transfer contact information from a connected Bluetooth device to the vehicle, allows calls to contacts to be activated using straight-forward voice commands and reads text messages aloud from compatible phones connected using Bluetooth.

SYNC also offers the innovative new Emergency Assistance feature which is designed to assist the occupants to call the local emergency services operator in the event of an accident. 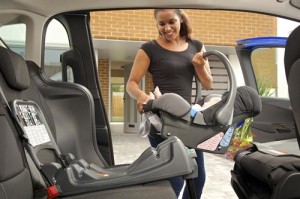 A flexible easy-to-use seating system features 60/40 split rear seats which can be folded flat with a simple ‘one-hand, one-motion’ mechanism. The front passenger seat can also be folded, creating an extensive flat load floor capable of swallowing loads up to 2.34 metres long.

The generous access makes it easy to load bulky items such as flat-pack furniture or even a bicycle through the side doors. An adjustable load floor in the boot creates a flat load space when the rear seats are lowered, with extra room underneath for valuable items.

More than 2,500 orders have already been received, the majority prior to the vehicle arriving in UK dealerships.

Anthony Ireson, Ford Britain marketing director, said: “We ran a Ford B-MAX promotional campaign offering the chance to win unusual prizes that would not normally be available to the general public.  Over 70,000 of those participating clicked through to an online Ford B-MAX configurator so we knew there was strong appeal from the start, but even so we were amazed by the true level of interest – especially since most customers placed orders before they had even been to a showroom.”