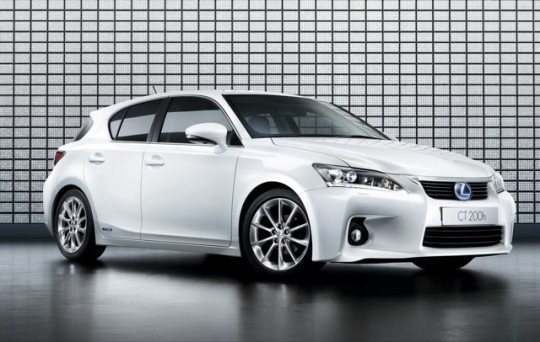 FRIENDS, family and colleagues will attest to the fact that Kylie Minogue and I are not alike in any respect.

I’m not small and petite, I’m not Australian (thank goodness), and I don’t frequent gay clubs, though I did go to Pink Punters once and had a jolly good time. Oh, and I can’t sing either. A spell in the Abbey choir in St Albans as a young chorister doesn’t count, I’m told.

So the only link – and it is a highly tenuous one – is that we’ve both driven the Lexus CT 200h.

But while hers, as you’ll remember from the TV ad campaign, was whisper quiet, mine wasn’t.

Well, to be fair, the car WAS pretty subdued, but with the roads as poor as they are here in the UK, it’s impossible to completely dial out road noise, no matter how good the chassis is.

Not the pocket Aussie songstress there but the Lexus, which has a very fine chassis indeed.

So, my time with the world’s first full hybrid premium compact car was frustrating at times. Yes, it was telling me that the economy was good as it ran in eco mode but there were times when the rumble from the road almost drowned out the radio because I don’t have it over-loud. Cheerio Chris, by the way. It’s been fun, occasionally.

What a neat and superbly finished interior. All the switches have a satisfying click and work smoothly and efficiently. The SE-L version comes equipped with very smart leather upholstery, a mix of cream and black in this instance.

Any Lexus plays the premium trump card well, and the CT 200h is no disappointment. The package here includes airbags all round, ABS, traction control, vehicle stability control, a very smart leather trimmed multi function steering wheel, rain sensing wipers, privacy glass in the rear, connections for your phone and media equipment, a multi information display and heated front seats. Not needed at the moment, admittedly,  but a boon in winter.

A neat little chrome lever allows you to select either drive, reverse or battery power, and there’s a push button start and electronic handbrake.

The CVT transmission – no gears, just drive or reverse – takes a few miles to get used to because there is no sensation of changing gear but it’s part of a highly efficient power set up that dips into electric propulsion now and again and puts power back into the battery as you decelerate or brake.

At first it feels like it’s got all the pulling power of a primary school tug of war team, but that feeling soon goes as you get used to the way the CT works.

Even though the accent is on saving the planet, even an eco warrior has to let his hair down sometime, never mind wash it, so there are a variety of ‘on demand’ driving modes, accessed by a big knob on the centre console. EV, ECO and Sport, flagged up by the changing colour of the backlighting above the big speedo, give you a variety of scenarios, which the CT takes in its stride.

The satnav screen has its functions controlled by the motoring equivalent of a computer mouse, sited on the centre console and operated in the same way as a mouse by clicking the required buttons.

Needless to say my lead boots got nowhere near the claimed combined figure of 68.9 – I was about 20mpg shy of that figure. Must try harder.

What you can’t fall down on is the fact it attracts zero annual road tax, and has the lowest BIK company car tax rating. And if you fancy a full on electric car, the Lexus can do that too, as long as you’re in a  situation where overall speed is not a requirement. Heavy town traffic, for instance.

It doesn’t present itself as an overtly dynamic car to drive, but having said that the feel is good but here’s plenty involvement if you need it. The CT handles in a predictable way, has a set of highly efficient disc brakes and certainly lives up to the Lexus values of quality, luxury and refinement.