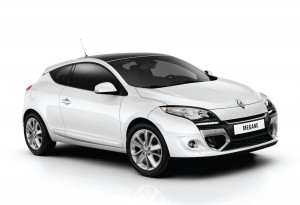 Somewhat annoyingly, I found myself with a French car to play with at the same time as the muck and the electrical appliance were in an interface situation over the royal snaps.

I almost abandoned the keys in disgust but realising not everyone is a follower of the blessed Katherine of Cambridge, I decided to soldier on with the task in hand. And in any event, anyone with a modicum of historical knowledge will know full well that the French have been bringing us topless royals since 1793, courtesy of Madame La Guillotine….So, to the subject of this test, Renault’s latest Megane Coupe.

Back in the day when you bought a 1.2 engined vehicle you pretty well got what you paid for. Something that was patently not as good – or efficient – as its sibling 1.6 or 1.8, and which was a bit like the wheezy boy at the end-of-term school athletics day. It would get to the finish but it would take a lot longer that the fit boys, even though they probably smoked an illicit cigarette or two behind the bike sheds at break.

Not any more though. The 1.2 unit in this latest Megane is something of a revelation. Yes, only a 1.2 but it has all the attributes and pulling power of something much bigger. It can give you diesel-rivalling economy with a claimed 53.3mpg and just 119g/km of CO2. A 0-62 time of 10.9 maybe isn’t that quick, but the Megane is a decent sized car, so on reflection it’s a commendable figure, as is its 118mph top speed.

The test car had a rather black interior with a few aluminium inserts placed here and there to break it all up, but immediately evident is the clean and uncluttered nature of the dash. A decent size centrally-located screen houses the TomTom sat nav and all the relevant information it has built in. There’s a big centre dial ahead of the driver with a digital readout that is clear and impossible to miss, with small dials for fuel and temperature inset. To the left is the rev counter with its trademark yellow needle and the right side has your trip information – mileage, consumption, range etc.

The heating controls are centrally sited with three knobs controlling the interior ambiance. Ideally located and easy to use.

The driving position is good, and there’s plenty of light in the cabin thanks to the big sunroof fitted to this model (a £420 extra).

But the seatback is quite ‘tight’ – the side support, while welcome, is firm and you certainly notice it as you slip into the seat. I fitted it OK but big lads (and lasses) might find it a bit on the tight side. Otherwise the driving position is fine.

And don’t plan on using the cupholder for a bottle of drink – it’s actually not quite deep enough and hence said bottle will loll around like a drunk at closing time.

Brakes prove to be a touch firm on first acquaintance – very efficient, but a bit more progression rather than a severe snatching of the discs by the pads would probably be more acceptable to most motorists.

Controls for the radio are on the steering column but you need to be familiar with what the buttons do because sited as it is behind one of the spokes of the steering wheel, you can’t actually see it.

Ironically this French challenger is built at Renault’s plant in Spain. So the overall level of fit and finish is a credit to Pedro and his amigos. And this new engine is proof that downsizing doesn’t have to be a compromise when it comes to driving enjoyment or indeed performance.