Skoda’s latest model to hit UK shores could quite adequately sum up the Czech firm’s progress over the past few years – rapid. 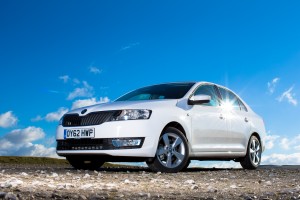 Enjoying rising sales in a period of doom and gloom is not to be sniffed at, and their latest model – reviving a name that first appeared on one of their cars back in 1935 – has a more than decent chance of keeping the progress onwards and upward.

Rapid is the seventh Skoda in their current lineup – the very first time they have ever had seven models on sale at one time – and hits the ‘price sensitive’ sector of the market with prices starting at £12,900 (1.2 75ps S spec). And believe me, you get a whole lot of car for that.

Displaying almost Octavia dimensions and Superb proportions for rear passengers, it slips into the range between Octavia and the Fabia, and as you might have noticed from the TV ad campaign, there’s a rather large 550 litre boot at the back among other worthwhile attributes, like the boot mat which is rubber on one side, carpet on the other, and the handy ice scraper that’s fitted into the fuel filler flap so it’s always there when you need it most.

The clean lines of the hatchback bodyshape means the opening to that big boot area is vast, and blends in well with the overall tidy looks of the Rapid.

Skoda expect 70 per cent of sales to come from retail customers – that’s you and me.

Peter Olah, design coordinator from Skoda’s Mlada Boleslav factory, describes his latest offering as ‘clever engineering with a human touch’, highlighting bits like the hook in the boot that stops your shopping escaping from the bag. 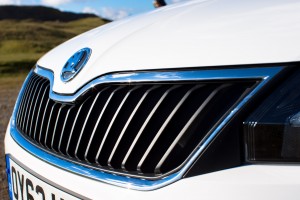 “We’re not competing with the cheapest brands but we believe our cars are worth the money. Every pound you spend has value,” he said.

And in a way he’s right. Because you wouldn’t realistically expect the interior of a Skoda to have the same sort of classy premium interior you’ll find on other VW Group products. But this one has. The dash deserves mention here, its straight functional lines giving it a smart user-friendly appearance, the top area being black to cut down reflections on the screen.

There are three trim levels – S, SE and Elegance – with five engine options from launch: four petrol and one diesel, with outputs ranging from 75PS for the 1.2 petrol to 122PS for the turbocharged 1.4 TSI unit. Even more efficient GreenTech models and an additional diesel arrive in the middle of next year.

As well as a good level of standard specification, there’s a comprehensive package of active and safety features so all inside are as well protected as they can be.

Bags of room in its Tardis-like interior means a family of five will have plenty of space, and with the 1.6 diesel sampled on the UK launch the other week, a car that will get you to your destination reasonably swiftly and without drinking vast quantities of fuel.

From bargain basement to success story – that’s been Skoda over the end of the 20th century and start of the 21st. No one laughs any more, do they?