It’s not size that matters, it’s how you use it….

And smart have finally, after a search stretching over a decade,  found the ultimate use for their little two seater fourtwo coupe – as an electric city car.

I know, because I’ve just driven it, even though it won’t go on sale here in the UK till  spring 2013.

There just happened to be a few charging up at their electric hook up posts at Mercedes Benz UK HQ at Tongwell at their latest media day, and we were encouraged to try them out.

And if ever there was the ideal machine to keep it clean and efficient around our towns and cities, then this is it. 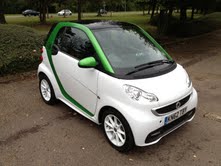 The perfect size, in that there is plenty of room inside for two adults; the perfect road footprint, because you can park it face in to the kerb and thus take up less space; and the ‘almost perfect’ (because the electricity’s got to be produced in the first place) eco credentials because it’s clean and efficient.

They won’t be cheap, at an estimated £15,000, but with a five grand Government grant towards the cost of running an electric vehicle, a 10k hit for a car that really does fit the bill for pure city driving begins to make real sense.

You never get a second chance to make a first impression and I’ve always had a love/hate relationship with the fortwo.

I can’t get it out of my head that it’s nothing more than a giant roller skate with a  box bolted on the top to keep you dry when it’s wet, and a car that lurches uncontrollably when you attempt to change gear.

But I love it because it really is such a comfortable little car to drive around in.

Now, ‘Lurch’ has been banished, because what you get with the 17.6kWh lithium ion battery is instant acceleration, smooth forward progress, with just a barely perceptible whine from the electric motor whirring away in the back.

Inside the two ‘eye’ pods on top of the dash house state of charge and performance indicators, and there’s a 6.5inch sat nav screen to help you find your way round town.

It’s more than capable of getting you up to and over the legal limit between roundabouts, so it’s no slouch – 0-62mph in 11.5 seconds and a top speed of 78mph.

The 90 mile range might not sound much, but this isn’t a car you’re going to be tempted to get into and drive to visit long lost relatives.The down side of electric car ownership is the fact you can’t drive one from London to Glasgow in a realistic time frame. But if you fall into the category of those who only do the maximum average trip of 35 miles a day and will never use a car for more than that, then the smart’s your man.

> Carrying on the eco theme, and why not, smart have also introduced an electric bike, which as you’d expect, is different from the mainstream.

And again, as with the car, there were plenty around at the media day to try out. So I swapped four wheels for two and headed for Willen Lake on the redway network.

The trip was certainly easy, as the pedelec can be set to give you varying levels of assistance from the 200 watt motor as you pedal. Or resistance if you feel that way inclined, which puts power back into the battery as you pedal along.

It’s definitely different. There’s a carbon toothed belt instead of a chain. There’s an inbuilt display on the handlebars to tell you what’s doing what. Even the spokes on the wheels break with convention. The battery is housed inside the frame and will give you 62 miles of cycling, depending obviously on how you ride – the same yardstick adopted for the economy achieved when you’re driving a car.

If you fancy the switch from the fast lane to the bike lane, it’ll set you back the best part of £2,500.