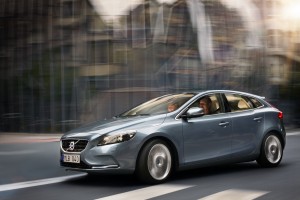 PREMIUM compacts, posh hatchbacks, call them what you will, but what you can’t dispute is the fact there are a lot of them around. And a lot of good ones into the bargain.

And things aren’t getting any easier when it comes to picking one out from the crowd with four new arrivals this year from VW (the new Golf), Audi (A3), Mercedes-Benz (A-Class) and the Volvo V40 vying for your deposit cheques.

It’s the sexy Swede under the spotlight here – we’ve already checked out the Audi, and hopefully won’t be long before we can tell you about the new baby Merc and the latest in a long line of Golfs.

V40 is a hugely important car for the Swedish manufacturer, bringing back a distinguishing tag to the market that in the past had a loyal following but which didn’t exactly set the pulse racing.

How times have changed. The importance is highlighted by the fact that the new V40, which went on sale in August, uses the underpinnings from the Ford Focus as its startpoint.  And you can’t argue with a startpoint that gives a car very similar dynamic qualities to one of the acknowledged class leaders.

But don’t be fooled into thinking this is merely a nordic clone of the blue oval’s finest, because it isn’t.

Take a long, hard look at V40 in the flesh and you’ll see a leaner, lower and wider profile than the higher roofed hatches that other manufacturers seem to prefer. The end result is a five door family car with its own identity, proud to wear the Volvo badge and all that represents when it comes to outright safety – whiplash protection, airbags aplenty and more warning devices than your ears are able to deal with.

Here’s a couple of things we picked up in the first half hour of driving the car.

Changing up to third or fifth gear you’ll probably find your hand coming into contact with one of the four dials that control the cabin heating and ventilation. Conversely changing to second, fourth or sixth will see your elbow bump the padded central armrest between the seats.

And the thicker than average B pillar makes the view over your shoulder something of a meerkat experience – you’re forever craning your neck to pick up any traffic heading your way.

So, do those together make this a bad car? Not in the slightest. 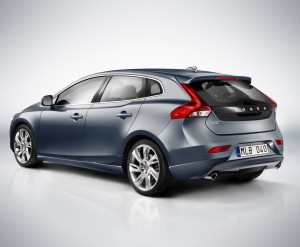 It handles superbly and is well planted on the road. The steering flicks from lock to lock with ease, making the V40 an effortless car to drive, and, as with any Volvo, a very comfortable one too.

It’s also got one of the most responsive diesel engines under the bonnet that I’ve driven for quite some time. Always on the button, the 1984cc five cylinder unit with its 350Nm of torque serves up plenty of swift and safe overtaking power. Civilisation has had over a century at developing engines and it would seem we’re getting rather good at it.

Press on too much and there’s a hint of understeer, that speed scrubbing Health and Safety warning to back off if you don’t want an ambulance heading your way in the near future. Overall, it’s the best handling Volvo for yonks.

There is a lot to like and appreciate in the V40. The classy finish, the ‘floating’ centre console borrowed from bigger models, the double floor boot system, neat recesses at the outer edges of the rear seats, and high quality graphics on the centre screen and instrument binnacle.

Lots of bingy-bongy sounds emanate from the dashboard, warning you of lane deviation, proximity of other vehicles or well-anchored objects like concrete bollards that might hurt the car. The sounds are very loud, probably because Volvo don’t want motoring writers damaging their cars, but there must be a volume control there somewhere. Also there are lights that flash when someone’s coming up to overtake you.

My favourite light, though, is in the gearknob. Yes, IN the gearknob, and you can see it flick into life as you push the start button and an elaborate graphic outlines the car in the big centre dial.

In fact, the cluster in front of the driver is a refreshing change, and, along with the rest of the car, shows ingenuity is alive and well in Sweden.