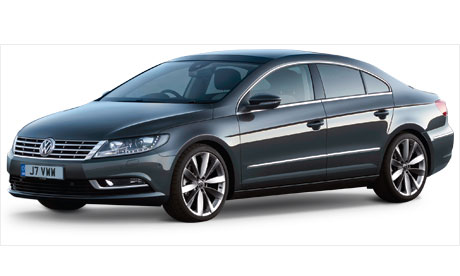 TIMES are tough all round – and they’re even knocking on the outer door of VW Towers in Germany.

The company that has been one of motor industry’s runaway success stories of latter years has been forced into an unprecedented cutback.

Gone, at the stroke of an accountant’s red pen, are six of the letters on the back of one of their sleekest models that used to say Passat CC.

Now it’s just plain CC. Well actually, not that plain at all, as it’s still a standout car in the VW stable.

And its popularity will hardly be hampered by the fact it’s got a shorter name on the bootlid. In fact, it gives the big four door couple a bit more cred, a touch more desirability.

Its lovely sweeping shape hints at there being a decent amount of room inside for the occupants, and that’s the case. Even with that sloping rear, those in the back still get decent headroom, as well as legroom that can accommodate the leggiest of leggy supermodels. Or tall gits like me.

The 2.0 TDI GT BlueMotion Technology with six speed DSG is my kind of car, with leather upholstery which has a firmer than many feel and which you sit on rather than in. In other words, I’d appreciate a little more side support.

High up on the tick list is its blend of four door practicality and sleek coupe-like styling.

It comes with stop/start, battery regeneration, Adaptive Chassis Control with its three suspension settings – sport, comfort and normal, more safety features than a BSI kitchen, and all the up to date technology you’d expect to find in a  car costing a touch under £30,000.

As extolled by the Sky Sports F1 coverage, ‘just drive’ could also be applied to the CC. It’s the sort of car, despite its length, that you’re instantly at home with. Slip behind the wheel and there’s a familiarity to the controls and cabin that puts you at rest.

It’s exceptionally well appointed inside, and with a good choice of engines and trim levels. And get this. There’s even ‘hands free’ for the bootlid. Wander up to the car with a bag or suitcase in each hand and as long as you’ve got the key in your pocket, a simple waft of your foot under the bumper is picked up by a sensor which will open the boot. A bit gimmicky – £530 worth of gimmicky – but according to one VW insider the sort of extra that once you’ve had it on a car, you’ll want it on every other one you subsequently buy. I can see where he’s coming from on that.

Opt for a model with 170 PS or more and you’ll also get standard XDS, an electronic cross-axle traction control system for improved traction and handling. It feels as if the car is coasting at times and you can get the sensation of approaching a roundabout or junction slightly quicker than you might want to, but rest assured all is under control and normal service is quickly restored.

Options include High Beam Assist, which automatically controls dipping of the headlights; Side Assist, which monitors the vehicle’s blind spot; Lane Assist and adaptive cruise control with City Emergency Braking function; and a rear-view camera.