THE French are getting the boxing gloves out of the drawer in an attempt to slug it out with Audi and Volvo in the all-terrain estate market.

The Germans and the Swedes are the knockout performers when it comes to quality four wheel drive estates, so can the most expensive Peugeot yet nick a medal on points? 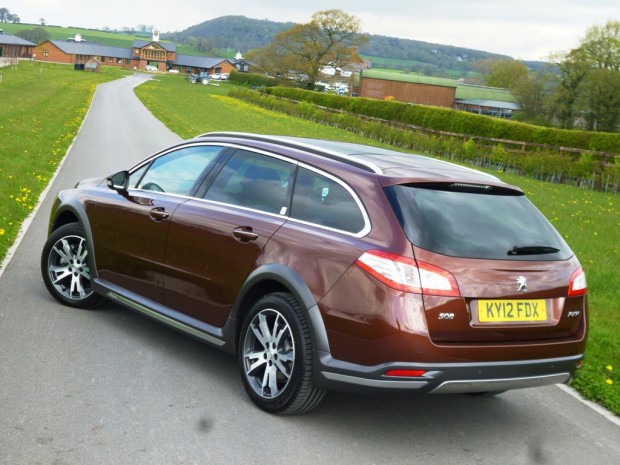 First impressions of the 508 RXH show that it’s fighting fit, full of kit and ready to go. It’s got that classy look that only an estate that’s been styled by someone who knows what they’re doing can exude.

Resplendent in a  coppery colour that is mirrored inside on the dash trimming, it displays a fit and finish that is a credit to the way Peugeots are put together these days – a vast improvement on days gone by. It looks and feels upmarket.

RXH is based on the 508 SW, but in this hybrid they have unplugged the rear axle and replaced it with one housing an electric motor. That drives the rear wheels so as well as having the benefit of electric and diesel power, you also get all four wheels drive as well.

The suspension is bumped up by some five centimetres, which boost ground clearance by 180mm to give it an ‘I can go off road if you need me to’ look.

We didn’t but in nigh on 600 miles of driving it over the week – Weymouth and back for the Olympic sailing, couple of runs to Luton airport and sundry round town trips – it acquitted itself well. Except when it had to change gear.

The M-Speed automatic box is the fly in the ointment here in what is in just about every other respect a pretty decent car.

Drive a similar Audi and the changes will be barely noticeable. Drive the Peugeot with its short stubby selector and unless your speed is highly conservative, the car will lurch back and forth as it goes up the box and it’s something that I personally would find hard to live with. And hard to part with £33,000 for the privilege…

In electric guise it’ll happily slip up to 35mph without help from the diesel engine, and you can chart its progress from the left one of the two main dials. It’s an eco-mete that indicates the percentage of of power used or recovered. Three zones indicate the mode of use of the battery – charge (energy recovery), eco (optimum operating range) and power (%of electrical power used). Lift off the throttle and there’s a very evident feel that the car is slowing itself down, as power is regenerated. It’s almost like putting the brakes on without actually touching them.

Somewhat surprisingly there’s not a lot of storage space, although the load area is generous.. Small receptacle in the middle of the centre console that’ll hold the key – it’s a push button starter – and a door pocket either side. But the centre armrest bin is big enough for a bag of sweets and that’s about it. It’s also home to the extra 12v and USB sockets but unless you know they’re there, you might not find them.

But it is well equipped. Directional headlights, front and rear parking aids, automatic electric handbrake with hill assist, a colour head up display that is one of three areas in the car where the sat nav info is displayed, quad zone air conditioning, a huge panoramic glass roof, a motorised tailgate – in fact all the creature comforts you’d expect in a refined tourer.

It’s superbly comfortable, and the seats bear neat copper colour stitching that matches the exterior colour of the car in this instance.

Ride quality can feel over firm on rough road surfaces and an offshoot of that extra ride height is that there’s a bit of in-corner leaning.

Overall though, stylish and likeable.