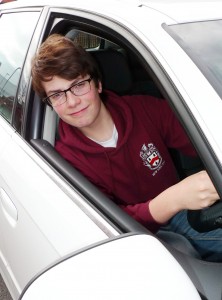 It is in honour of a late member of the group, Phil Llewellin, who lived near Oswestry in Shropshire and whose writings about cars and his travels were read around the world.

William, a pupil at Wolverhampton Grammar School, wins £1,000 worth of travel vouchers. He thinks he will treat his family to a holiday at a Center Parcs.

His other prizes include a week’s loan of an Audi of their choice to his parents, a trip around the Aston Martin headquarters at Gaydon in Warwickshire and a passenger ride in one its cars, and an hour’s tuition at the wheel of a Mercedes at Mercedes-Benz World in Surrey.

William said: “This really is a fantastic prize and I’m so thrilled to have won.”

His winning story saw him at the wheel of a Radical sports car, choosing to drive it (at law breaking but highly imaginary speeds) not to an exotic destination like Nice or Monaco, but to the car park of the Lidl store at Salisbury.

His story explains why: ” I drive around until I spot a smart little navy blue Audi A3 and I park alongside it, rev the Radical’s growling engine, and wait.

“Before long the manager comes over to her car. She sees me and her jaw drops. It’s my sister, Lillie. Result!”

William has been interested in cars for years and has already driven a Ferrari on a track experience event. He wants to design cars for a living and admires cars that both look and go quickly.

Ian Donaldson, chairman of the Midland Group of Motoring Writers presented William with his prizes and said: “Phil Llewellin is a much missed member of the group. It’s good that the award in his memory has gone to someone he would loved to have chatted to about cars and where to go in them.”

The award is supported by Audi, Aston Martin and Mercedes-Benz.