ONE of the big box tickers about motoring journalism is getting the chance to try out a car long before anyone who might be in the market to buy one actually gets their bum in the drivers seat.

A privilege indeed, all the more so when the car park in front of you contains upward of a million quids worth of hot new talent.

Customers will be taking delivery of their new Audi RS7 Sportbacks late this year – those of you eagerly waiting for your new Audi RS Q3 won’t get them till early next year.

So I’m going to rub salt into the wound by saying I drove them both last week – and your wait will be worth it. 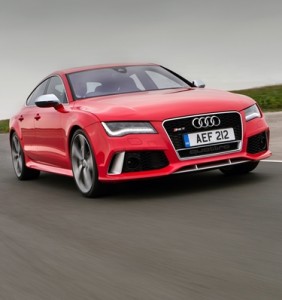 When it comes to shifting cars, it’s premium or affordable that are attracting the buyers. Traditional volume sellers, being neither one nor the other, are faring less well of late, and there always seems to be a steady stream of people wandering into showrooms eager to buy one or other of the former.

In Audi’s case, Quattro accounts for a third of sales, and both the newcomers come thus equipped.

The German manufacturer has launched some 60 S and RS variants so they know what their buyers are looking for, and in the case of the RS7 it’s the cachet of owning a car that can reach 62mph in under four seconds. Hallowed territory. In fact the only other four door hatch capable of the feat is Porsche’s Panamera. A serious rival for the RS7 Sportback until you get to the pricelist – the very competively priced Audi is £83,495, the Porsche weighs in the wrong side of £100,000. And some.

You can spec the Audi with, among losts of other toys, 16 and a half inch carbon fibre reinforced ceramic brakes – as big in diameter as the wheels on a vast majority of cars you’ll see on the road.

The sleek Sportback combines the blistering performance of the 560ps RS6 Avant with the distinctive coupe like profile of the A7. The twin turbo V8 power you’re buying into will propel you to a potential 189mph and to 62mph in just 3.9 seconds. A truly exceptional engine, and one with a grip on reality. For despite all the undoubted grunt, with its stop/start and cylinder on demand technology it’ll happily run on just four of the eight cylinders available, and thus make sensible economy of a shade under 29mpg available. Well, sensible for an engine of this magnitude.

Sales show Audi to be the leading UK brand for premium cars, and they’re now offering 47 models, as opposed to the 17 of 12 years ago.

The RS Q3 is the fastest performance SUV you can currently buy, and with a claimed residual value of 52 per cent after three years (CAP Monitor figures) it’s currently the slowest depreciating car you can invest in. And again a Porsche figures here – it’s beaten only by the Porche Cayman, a great car but nothing like as practical..

Sales of the Q3 have doubled in the past year, so it’s a car that’s obviously hitting the right note with UK buyers.

The sports suspension fitted to the RS Q3 brings it down 25mm, giving it a lower, squatter look than its stablemates, and its bigger alloys help fill up the wheel arches like never before.

A car then for which the term Sports Utility Vehicle is rather apt. Powered by Audi’s excellent 2.5 litre five cylinder TFSI engine, there’s a distinctive rasp from the axhaust, 420Nm of torque available and a swift sprint to 62mph in just 5.2 seconds. Its electronically limited to 155mph but you don’t need to get anywhere near that to enjoy what is a very accomplished car with blistering mid range performance.