IT was, on the face of it, probably the most under-anticipated car scheduled to turn up ready for appraisal. Boy, how wrong can you be?

Vauxhall’s Insignia has never been a car that has evoked more than mild interest in me – about as likely to spark a reaction as an impassioned plea from the other half for a bit of retail therapy.

But there revamped model is the latest in a line of Vauxhall D segment  cars that stretches back 60 years. The Cresta, the Victor, three incarnations of the Cavalier and  over half a million Vectras – all have been the staple diet of the British motorist over the years, and Insignia has won its fair share of converts too.

Making the news is an all-new infotainment system, incorporating Bluetooth-operated internet connectivity, an 8-inch touchscreen, and 3D navigation and voice control, which is fully compatible with a driver’s smartphone and allows drivers unrivalled communications while on the move. A DMB (Digital Media Broadcast) radio is now standard across the range.
But it’s a crowded marketplace out there – a very crowded marketplace – so you need to employ that extra bit of innovation to draw your customers in. 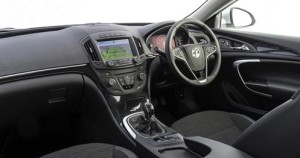 The touch sensitive centrally located screen is so simple to use it lets you concentrate on what you should be concentrating on – driving the Insignia safely. And while its not taxing your powers , you can take in what else is around you. In this case, a pretty neat and driver friendly cabin. The seating position – and the level of comfort you’re treated to – is excellent, just about the best I can recall for many a month

There’s even a touch sensitive mouse pad situated just behind the gear lever which makes using the set up even easier.
But while it’s a big car, accentuated here by the drab phantom grey paintwork, there’s a vast bonnet in front of you and a huge boot behind. But  the cabin in between is not as commodious as you might expect it to be. Space is fine up front, but those in the back could find their knee room a trifle restricted.

The Insignia’s range has been simplified, too. There are now eight trims (down from 14 in the outgoing line-up), ranging from Design to Elite, with a mixture of new models that will appeal to both retail and fleet buyers.

And like all Vauxhalls, the New Insignia range will come with Lifetime Warranty, allowing first owners peace of mind for as long as they own the car, up to 100,000 miles.