BEING disappointed with a Golf GTI is about as likely as Alastair Darling’s eyebrows turning white overnight.

Some might be at odds with its sometimes seemingly harsh ride which can at times make your eyeballs vibrate in their sockets like a ball on a bagatelle table ­­- but that’s all dependent on the quality of the road surface of course.

But press on and it will dig in on corners, the onset of any trademark front wheel drive understeer being well telegraphed back to you behind the wheel so you can do the necessary to avoid any unnecessary laundry problems. 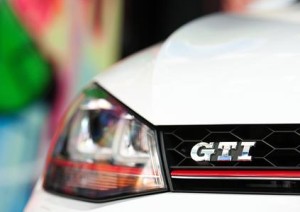 Its over 37 years now since the first Volkswagen Golf GTI appeared in the UK – a car that was planned as a limited series of 5,000 cars worldwide but which thus far has found its way into over 225,000 garages around the country, not to mention over 1.7 million across the globe.

When the 1975 Frankfurt Motor Show opened its doors to the public, the Golf GTI study made its debut on the Volkswagen stand. ‘The fastest Volkswagen ever’ boasted the advertisement – and that was no exaggeration. The GTI accelerated from 0-62 mph in nine seconds, leaving considerably bigger and more expensive cars standing.  The result: show visitors were so impressed, VW management had no choice but to build a special series of 5,000 cars. And then some more. And then even more. 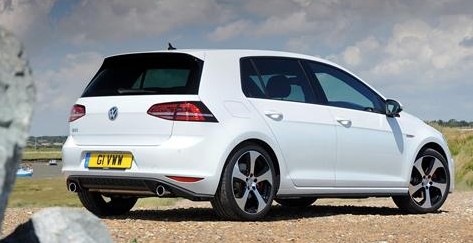 Today’s version, of course, has grown in size and stature to absorb all the safety features demanded of a 21st century car. And so has its inbuilt performance. That initial sprint time has been trimmed by three seconds to 6.5, and its top speed now stands at 151mph. The engine has grown to a 2.0 litre 220ps powerhouse with a chunky 350Nm of torque. ‘Responsive’ doesn’t really do it justice, and happiness is indeed a bright red GTI on a rozzer-free stretch of deserted, tight and windy road.

Slip behind the flat bottomed wheel and you could be sitting in something that plies its trade at the prestige end of the market, rather than lining up against the succession of hot hatches that have tried over the years to take away the Golf’s crown. 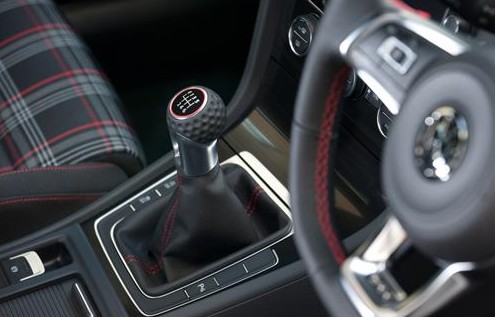 The interior is a credit to the ability of Volkswagen to marry up the two, and it’s good to see the GTI is faithful to those tartan trimmed seats of the original.
It’s still very much a seat-of-the-pants flyer but it’s also very much a refined cruiser, supremely comfortable with lots of neat touches, and with a dash that might resemble the helm of the starship Enterprise but which is an abject lesson in clarity, with a large eight inch colour info screen.

And it’s when you’re cruising along that it displays the level of refinement of a  car from a different class.  Ask it to come out and play and it’ll sprint off into the distance – but it won’t make your ears bleed as it does it.

It’s still has all the attributes of the original – sharp on-road dynamics, a highly responsive four cylinder engine and the ability to keep the driver involved.

It is of course more environmentally friendly, safer and far more efficient than its predecessors. And it retains its day to day usability, probably all the more so because 21st century GTI has a whole host of standard equipment and features that the small band of engineers who worked on the very first prototype could only have dreamt about.