HOW about this for timing – on the day the Peugeot 308 was announced as Car of the Year, we bring you our thoughts on the classy French hatchback.

And if you thought the 208 was a step in the right direction for Peugeot, wait till you get a close up look at the new 308.

It’s a vast improvement on the car it replaces and to be fair it needs to be – the C sector of the market accounts for a third of all sales in Europe so being ‘decent’ just doesn’t woo buyers into the showrooms any more. 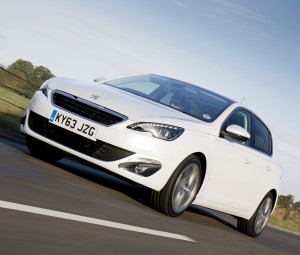 You need to add in a bit of that French ‘je ne sais quoi’, only in this instance we do know quoi. It’s quality, and a more upmarket feel than you’d have got from 308s of old.

The model has been a big seller for the French manufacturer since its launch in 2007 – and the latest version shows no sign of giving up without putting up a fight.

With 308 being a number, here are a few more to ponder:

140kgs is the weight saving over its predecessor

91.1mpg is claimed to be possible on the combined cycle

The 1.6 litre unit under the bonnet of the model sampled here (a Feline THP 156 listing at £21,345) proves to be livelier than a terrier’s tail at teatime and gave  a very good account of itself, the156 standing for its bhp output. A torque figure of 240Nm from 1400rpm means its accelerating ability is also more than adequate, 62mph appearing in a matter of 8.4 seconds and a top end of 132mph – impressive figures from just 1598cc.

But it’s the bits you can see rather than hear that are the impressive features of this car. Peugeot have effectively decluttered the dash area, so you won’t find it awash with switches, buttons and knobs.

Like the 208, the main instrument cluster sits above the top edge of the small steering wheel, so an uninterrupted view is guaranteed. And there’s no handbrake – just a button operating the electric parking brake.

Basically, all the information and controls you need are housed in the 9.7 inch centrally located touchscreen. It’s obviously the way to go in this info-tech dominated world, and in reality is fairly easy to use.

The huge panoramic sunroof adds to the overall light and airy feel to the cabin although not every model will have this, obviously.

One black mark though goes to the steering wheel controls for a variety of the functions – they are not that well lit at night, so familiarity is a must  before you head off into the gathering gloom. 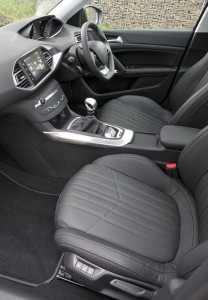 The driving position is good and the steering wheel is, as we’ve said already, smaller and neater than the norm, flat bottomed, so legroom is unhampered and people of all shapes and sizes should have no problem finding a comfortable position behind the wheel.

Gearchange has a nice feel to it, with a reassuring clunky movement. And the steering is nicely weighted, with plenty of feel and response for the driver, so even the slightest wiggle will tell you the wheels have changed their course.

One little French quirk you’ll notice is that the speedo needle flicks from left to right round the dial, while the rev counter needle moves in the opposite direction from right to left. And it’s the same for the fuel and temperature gauges – a different touch.

Suspension is nicely compliant, with a bouncy feel to it that gives an acceptable ride quality, even on some of the ropey roads used for this appraisal. A good smooth ride is a definite plus point these days, and the 308 is certainly a  good handler, and a forgiving one too. If you feel the need to drive it quickly it’ll let you, without biting back.

There’s lots of kit and technology onboard, but watch for the positioning of the electric window switches. If you’re seat is well forward, you’ll have a job moving your arm back far enough to be able to operate them.

Let your eyes linger over the smart new body – certainly the neatest 308 they’ve built to date. It’s difficult to build a five door hatch that’s different from the norm, but the 308 now has a renewed character and style that should win it converts from other marques.