LOOKS like Nicole is getting her bus pass – ZOE is set to be the Renault name on the lips of motorists in the future.

And while Nicole certainly added a touch of glamour to the ad campaigns of old, the looks in this instance unreservedly belong to the car itself.

ZOE actually looks like she was styled by someone with a love of automobiles, someone who wanted to pen a car that people would look at and appreciate. 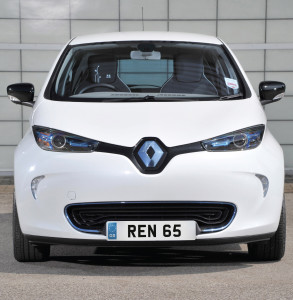 The fourth offering in the Regie’s all-electric lineup is based on the same platform as the Clio, but is actually longer and quite a bit taller. Over 10 cms, as you ask.

I had a brief run in one early last year round the Millbrook test track, but the chance to take it out onto the open road backed up my fading first impressions. That here is a decent electric car with, finally, the looks that will attract buyers.

Once they’ve got over the fact it’s not just a case of paying your money (£15,195 in the case of this Dynamique Zen version) and heading to the nearest charging point once it begins to run low on range (a claimed 62 miles in winter suburban driving, 90 once the climate hots up a bit).

You need to factor in the monthly cost of hiring the batteries from Renault. If you’re a round town sort of driver and won’t top 7500 miles a year, budget £80 a month on a 12 or 24 month contract. The higher your mileage obviously the greater the cost. 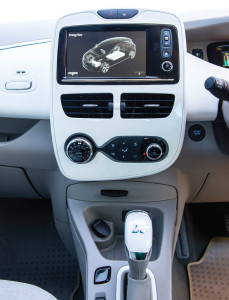 We used to have a Zoe in the office years ago – most do, I guess. But while the human version suffered from a faulty volume control, electric ZOE doesn’t need one in the first place, because she doesn’t make any noise worth mentioning.

Start her up and while there’s the odd click here and there, there’s nothing to disturb your concentration. Select drive, press the pedal and she’s off, the power instantly available and displaying a high level of responsiveness.

Well equipped and certainly very well finished, she’s got a lot going for her. ZOE can be charged to 80 per cent capacity in around half an hour, if you can find a 43Kw rapid charger, so a leisurely coffee stop and you’re off again. For another 70 miles or so.

As the flagship vehicle of the French brand’s four-strong 100 per cent electric vehicle range she’s perfect for commuting, supermarket and school runs, and for households who want to downsize their engine and carbon footprint. ZOE is the first affordable car for everyday use to have been designed from the ground up as an electric vehicle.
She’s available in three trim levels – Expression, Dynamique Zen and Dynamique Intens – and is packed with a raft of innovations for a new form of motoring. The neat supermini is the first to be equipped with ‘Range OptimiZEr’ which combines three major innovations – bi-modal regenerative braking, a heat pump and MICHELIN EnergyTM E-V tyres.  The electric motor has a power output of 65kW, equivalent to 88hp, and instantly delivers maximum torque of 220Nm.

Acceleration and pull-away are reasonably responsive from low speeds, while its top speed is limited to 84mph.
There’s an eco mode button that cuts the usual 87bhp down to 60, and you’ll certainly notice the difference – like allofasudden driving into a ferocious headwind. 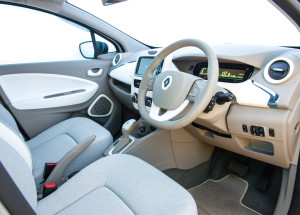 So you can’t accused of creeping up on unsuspecting pedestrians, ZOE is fitted with ‘Z.E. Voice’, a sound which warns them the vehicle is approaching. ‘Z.E. Voice’ can be heard from 1 to 18mph and was the subject of special design work to create a bespoke sound identity for ZOE. The driver can choose between three different sounds, while it is possible to turn off the warning system by simply pressing a button.
There’s a good amount of interior space and you don’t need a Ph D in automotive engineering to understand how to work ZOE. Switch on, select drive and off you go.
Inside, the dash comes from the Clio, but with a digital display instead of the usual dials, and there’s a decent size info screen. All very light and airy inside and very family friendly.
And here’s a thing. If you want to go further afield than ZOE will let you, Renault offers a 25 per cent discount on a conventional petrol or diesel rental from Enterprise.
So, as that famous French floosie Marie Antoinette said, you can have your cake and eat it. Or something like that.