THE car that held the record for the fastest front wheel drive lap set round the legendary Nurburgring race track (until Renault recently beat it) is now available to you, me and anyone else who wants to buy into the Cupra cult.

That’s what SEAT unwittingly started when they unleashed their first car to carry that name back in the year 2000 – a car that was then perceived to be an acceptable alternative to the ubiquitous Golf GTI for those on a tighter budget and not driven by badge snobbery.

The powerhouse performance of the newcomer is possibly not a great deal of use on the M25 or any big city ring road, I’ll concede, but it’s good to know you’ve got it in your back pocket for when the roads open out and the traffic thins….

A decade and a bit on from that first Cupra and they’ve produced a car that is the embodiment of ‘auto emocion’ – SEAT’s catchphrase. The Golf might be the ‘must have’ for many petrolheads, but the Leon Cupra has racked up no less of a cult following.
Built on the same VW Group platform, it’ll out perform the Golf on sheer figures, yet undercut it on price.

It’s the fastest and most powerful car the Spanish manufacturer has ever built – but it’s equally at home being used as an everyday family car. And as such it’s available as either a three door SC or five door hatch, displaying a potent mix of Spanish flair and German quality.

It did its record-breaking lap in under eight minutes, and it probably wouldn’t take you much longer behind the wheel to be wooed by its abilities.

You can either opt for 265PS or 280PS output, and in either guise the response is pretty well immediate, the handling sharp and reassuring and interchangeable via the onboard Cupra Driver Profile. That gives you active suspension management using the new DCC Dynamic Chassis Control system. Plenty of options but try the Cupra setting for the assault on the eardrums alone.
Both versions, with either six speed DSG or six speed manual, will hit 62mph (100kph) in under six seconds and there’s the added advantage of a electrically controlled mechanical front differential for a better high speed cornering experience. 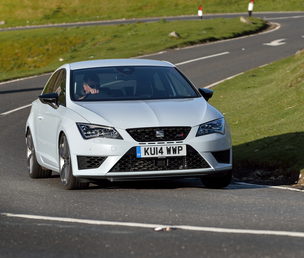 A soaking wet Mallory Park racetrack for the UK launch of the car wasn’t perhaps the best environment in which to explore the Cupra’s capabilities. Or maybe it was, because the lower speeds involved gave just that little bit more time to appreciate the interaction between the bits that make this such an impressive performer. Its 350Nm of torque gives it a lusty spread of power from 1750rpm to 5300rpm – fast and safe overtaking is never an issue here.

Yet for everyday use it won’t hit you in the wallet – average consumption is a claimed 42.8 for manual models, and up to 44.1 for DSG equipped variants.

The Co2 figure is commendably low at 149g/km, a lot less than the last second generation Cupra R pumped out from its 265PS engine.

And it’s easy to overlook the fact all this comes from a mere 2.0 litre four cylinder engine – a fact that didn’t go un-noticed by my driving colleague, who remarked it produced the same power as his personal Porsche from about half the size! 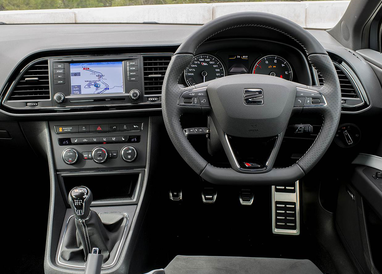 No question which is the more practical for everyday use though.