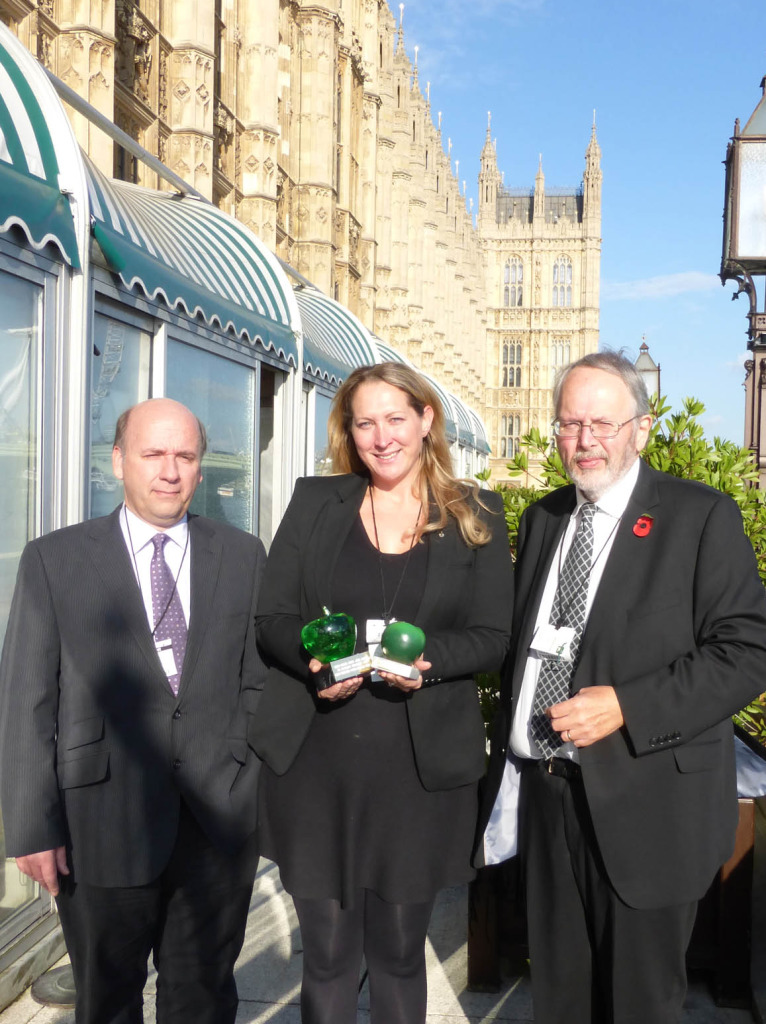 Pictured above: Vanessa Nalder, press and media relations manager at Mitsubishi Motors UK, holds the two awards collected by the company at the House of Commons presentation. With her are Midland Group chairman Ian Donaldson (right) and vice-chairman Mark Slack.

MITSUBISHI’S big but frugal Outlander PHEV has taken top spot in a set of awards for cars that mix modest thirst and emissions with the ability to entertain their drivers and keep running costs down in the real world.

The Green Apple Awards were presented on Monday (10 November) at the House of Commons. They are organised by the Midlands-based The Green Organisation and were judged by members of the Midland Group of Motoring Writers.

Midland Group chairman Ian Donaldson said: “When The Green Organisation asked us for our current green champions, we wanted to go further than some other awards and look beyond the official figures and rank our favourites in the real world, taking into account how they performed in our hands.” 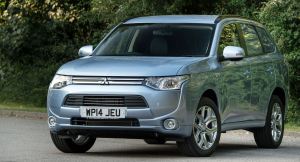 One judge said of the Outlander PHEV: “Many car firms have claimed to have introduced a ground breaker in the past 12 months but this one really is. It embraces everything that’s good about new technology without compromise and has the potential to save you a small fortune. Mitsubishi’s decision to price it the same as diesel is the real clincher.”

Second place overall went to the diesel engined Honda Civic, which judges said astonished them with its real world economy.

In silver position was the Suzuki Swift. It was described by one judge as ‘reasonably frugal but balances that by being a hoot to drive while remaining a really honest car; there’s nothing pretentious about the model, it just looks good, is well built, has plenty of kit and sips at the fuel no matter how much fun you’re having.’ 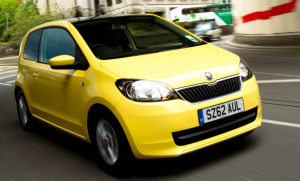 Winner in this category is the Skoda Citigo. One judge said: ‘I’ve chosen the Citigo because… it’s a great drive, thoroughly practical with low consumption and a price tag to match.’ Another said: ‘The Citigo is a perfect demonstration of how a car can be economical, inexpensive, beautifully built and a pleasure to drive.’

Another hard fought category this year with a long term favourite in second spot, in the shape of the Renault Clio. One judge said of the Clio: ‘Good looks combine with an extremely frugal and fun to drive diesel engine to put the Clio near the top of anyone’s list.’ 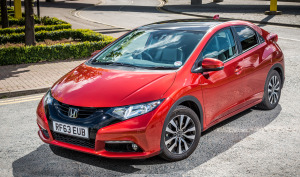 Top spot goes to the Honda Civic with the 1.6 litre diesel engine. It was described by one judge thus: “The Civic 1.6 diesel provides real-world fuel economy that is staggering, even sipping less fuel than hybrids, while still providing enough performance to keep most drivers happy. A superb all-rounder.” 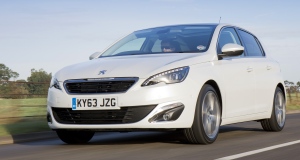 Here is a car that shows Peugeot is coming back on form, with a complete package that moved one judge to say: “I’ve chosen it because… style meets economy with no corners cut. A simply delightful car.”

A long standing favourite makes it into second spot this time, in the still highly stylish shape of the Range Rover Evoque in eD4 Pure form. One judge said of the Evoque: “Still looking so stylish and still enjoying the enviable position of being both environmentally responsible and lusted after by its buyers.”

Pole position goes to the latest version of the Nissan Qashqai. It was described by one judge as “superb quality, superb drive and awesome economy. A formidable family car.”

We salute one of the brave pioneers, with the Vauxhall Ampera in second place. A judge said: “The Ampera can be proud of the way it has shown that family cars can be both very green and make a sound case for everyday family transport.”

Topping this category is the Mitsubishi Outlander PHEV. The Outlander was described by a Midland Group voter as “the sort of car that gives big 4x4s a good name and makes an utterly compelling business case for a lot of potential users.”

Midland Group members love the Jaguar XF and voted the diesel version into second place this time. We loved the way the XF continues to add a dash of British style to the roads of the world while returning the sort of real world economy considered the realm of smaller cars not so long ago.

In top spot in this category was the Audi A6. As one judge said: “BMW has led the way here for ages, but finally Audi has responded with the new ultra range. Powerful, economical and well priced, they’re a big step on and mean the ball is now in the court of its rivals.”

There was strong support for two of our category winners, with an honourable silver place going to the Honda Civic, a car that continues to astonish drivers with its real world fuel economy.

Our overall winner is… the Mitsubishi Outlander PHEV.

** Watch this space for a test report on the Outlander PHEV in the next few weeks.