I’ll stop carping on and explain that Cylinder On Demand (COD) is the rising star of the latest refettled Audi Q3 range, now on sale.

In a nutshell, the 1.4 litre TFSI petrol engine has some technological wizardry that knows when you don’t need all four cylinder pumping away under the bonnet – so it’ll shut two off and run on the other pair, until such time as it detects your right foot twitching in anticipation of a bit more speed, at which point it brings the other two back into play again. The benefits are that you don’t waste fuel and it cleans up your CO2 emissions a bit at the same time.

The latest incarnation of Audi’s compact SUV gets a few changes to its cladding, notably moving the front fog lights into the main headlight unit and giving it a new distinctive radiator grille, to tidy up its already smart face, as well as adding in even more equipment.

Common to all versions is dual zone climate control, a Concert audio system with a 6.5 inch retractable colour display screen, Bluetooth and light and rain sensors.

There’s a new three spoke multifunction steering wheel to keep you in touch with the tarmac and the onboard systems, and the cabin has room for up to five adults to travel in comfort, as well as a decent sized boot area for your luggage.

If you’re following one you’ll not fail to notice the new dynamic ‘scrolling’ rear indicators which illuminates sequentially within two-tenths of a second from the inside out in the direction the driver intends to turn.

Audi’s drive select adaptive dynamics system comes as standard now, an there’s the choice of a six speed manual or 6 or 7 speed S tronic according to model.

Most of the new engines show an increase in power but while that’s not applicable to the 150ps CoD unit its CO2 figure is down nine to 128g/km.

You can have your Q3 in SE, S line and S line Plus trim which will give you even more toys to play with. Specify Audi connect and your car becomes a mobile wifi hotspot, allowing passengers to play while you have access to online traffic info and navigation via Google Earth and Google Street View. 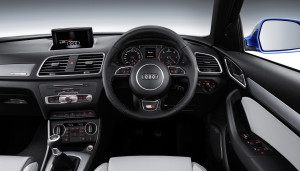 Audi now has a staggering 509 derivatives in its 50 model product range – quite a jump from the 17 model range they offered UK buyers back in 2001.

In the 50 years they’ve been operating in the UK they’ve sold two million cars and last year was their best yet with over 158,000 cars registered.

In fact it took something in the order of 40 years to register a million sales. Doubling that figure has taken them a mere decade.

Their only limiting factor is production capacity, not customer demand, so in reality those sales figures could have been much higher.