WHEN a nice sunny day presents itself but your heads sticks out into the wind a bit and what used to pass for a thick covering of hair is thinning out and losing its thermal efficiency, an autumnal morning can feel a trifle chilly.

But that’s no excuse not to drop the top on Mazda’s all new MX-5 and head out into our glorious countryside for a spin.

When you’re 6 foot 4 it’s a case of dropping into the Mazda as it sits as low to the ground as a dachshund’s dangly bits, but once you’re in you’re ready for business.

And it’s time to revel in the Mazda’s responsive and fine handling – it’s always had a reputation for that. The bonnet the stretches away in front even though it’s a relatively small car but low down in your seat, the subtle curves of the wheel arches are clearly in view. 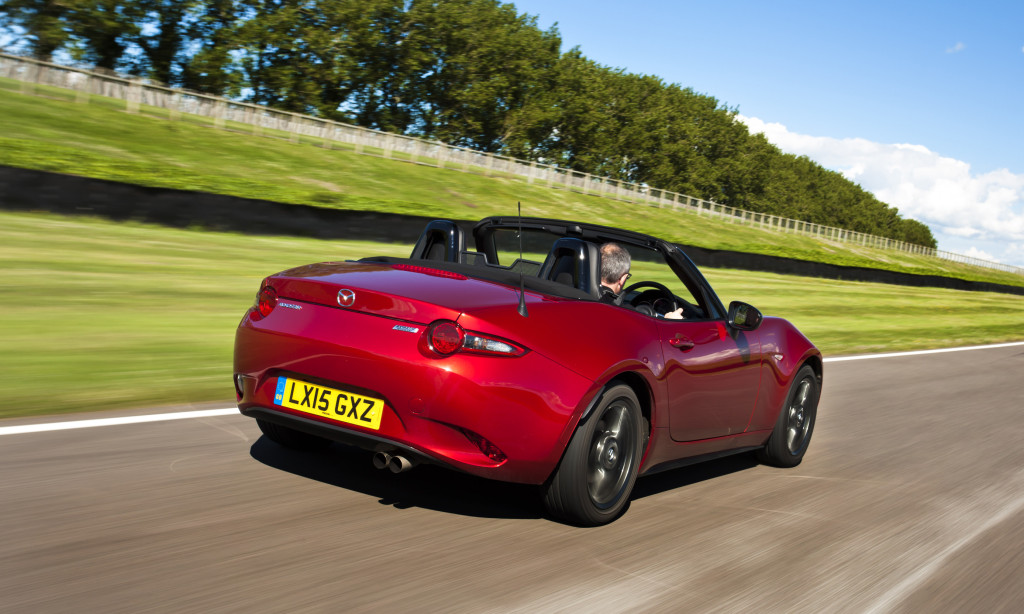 Took me back to the launch of an earlier version in Cornwall and a memorable trip round the peninsula to Lands End and back to Padstow with a very dear friend and motoring colleague sadly no longer with us. Tight lanes are the MX-5’s forte and show up that crisp handling, as well as its poise and balance.

That was the case then and it was also very much the case with the new model, that everyone who drives it seems to find an improvement.

I’m no different there.

The tiny gearlever snicks precisely through the six speed box and it’s happy enough to amble around but the quicker you go the more you get out of it. It’s a car that feels really up for a bit of spirited motoring, like an over eager puppy straining on a leash.

There’s a real sense that it’s cocking a front wheel as you barrel through a sharp corner, but it always feels predictable and that’s a very reassuring trait.

The manual soft top roof is easy to operate – release the locking handle, pull it forward and lock into place. Job done, and it does a respectable job of keeping the cabin snug and warm and the road noise outside. Time taken? As quick as you can manage it but we’re only talking a matter of seconds here.

And there’s good news for Popmaster fans as well, because even when travelling at a fair old lick you can still make out the dulcet tones of Ken Bruce asking the questions.

Not the biggest cabin in the world but it’s snug for its two occupants.

And that snugness is accentuated when you want to make adjustments. Controls for nav screen and radio sits in the centre but it’s quite a long way back so you have to contort your arm a bit to be able to fiddle with the controls, otherwise your elbow comes into contact with the cupholders that sit at the rear of the central tunnel.

I had intended to regale you with all the facts and figures about the new MX-5 but I feel strangely drawn away at this point to tell you what a good car the CX-3 stablemate is as well, after having the opportunity to drive both on the same day.

It has an excellent, commanding driving position even though its’ not a car noted for its hugeness.

The automatic version of the SE-L model came propelled by a 120ps SkyActiv engine but it’s nippy, and particularly when you use the sport setting, which gives it a real shot in the arm and makes it a lot more fun to drive. It holds the gear longer and manages to sound the part too.

It doesn’t necessarily have stand out looks to distinguish it from the other SUV crossovers out there, but it is a very efficient vehicle without doubt.

It handles well, changes direction well, and has a lot going for it.
One for Mr Family Guy.