IT says Fiat on the boot and bonnet, and 124 Spider on the bootlid, so yes, you do have a two seater Italian sport car on your drive.

A car with a lusty little 1.4 litre turbocharged Italian engine under the bonnet, some Latin styling cues in the shape of the twin power bulges in the bonnet – and underneath, some good old fashioned Japanese DNA. 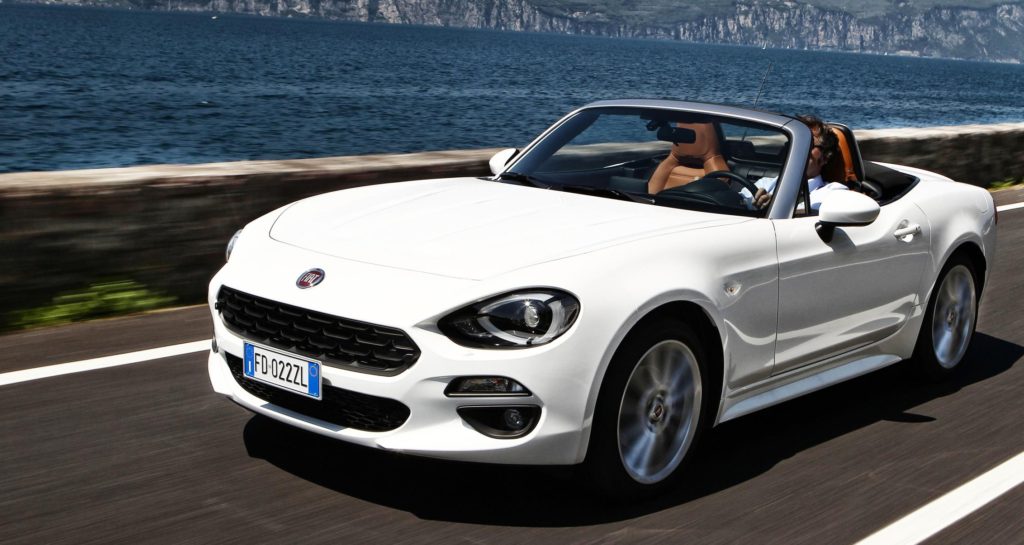 Fiat’s pretty little two seater is very much a Mazda MX-5 in a new dress and with a new pair of lungs, the collaboration with the Japanese manufacturer a quick and efficient way to get back into the game without spending a fortune in development costs.

And why not? For as long as most of us can remember the MX-5 has been the world’s best selling – and arguably best – sports car. The basic premis of engine at the front, rear wheel drive and a canvas hood that can be dropped when the sun peeps through the clouds has stood the test of time for Mazda. You really can lower it one handed from the drivers seat without having to get out of the car.

I think I’m right in saying those power bulges were needed on the original 1960s Pininfarina-penned 124 Spider to cater for its twin cam engine. No real need today, but a concession to the past history of the 124 and they do make the view forward over the long bonnet a bit more interesting.

You’d expect the Fiat, being Italian, to be sportier and more leftfield than the Mazda but there’s not a lot of difference. Bit more of a snort from Luigi’s exhaust perhaps, and the 1.4 engine seems more powerful than its 1.5 Japanese counterpart.

Its steering has a nice weight to it and you can feed it quickly enough to make the drive quite involving. You’ll experience a little bit of body roll in a corner, but it all feels well enough planted on the tarmac and its rear wheel drive set-up helps you push on through bends. Ride quality too is pretty good for something so low to the road as it has a fairly compliant suspension set-up.

The 124 is in fact bigger than the Mazda but it still feels compact on the road.
The stubby lever atop the six speed gearbox has a short shifting and precise feel, making up and down shifts – accompanied by the crackle from the exhaust – add to the enjoyment behind the wheel.

By its very nature a roadster isn’t going to be excessively practical and you won’t get very much in the 140 litre boot, but you can squeeze in a couple of soft bags for a trip away. 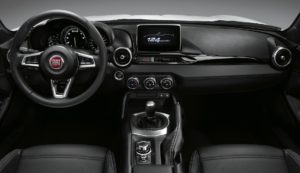 In the compact and well finished cabin, the instrumentation is classic white on black and while it’s a snug fit, the seats are thin yet comfortable enough to accommodate varying sizes of driver. There’s a lockable storage space between the two seats, and cupholders that can be slotted into other locations around the cabin.

So, two cars that have very much the same credentials, making an interesting choice a difficult one, and one which might in the end come down to price. And there’s £1,000 in it at entry level, in favour of the Japanese donor chassis…..