ANYONE out there expecting the new Honda Civic to be much of the same is in for a surprise. Because it isn’t.

Somewhere along the line the decision has been taken to say ‘sayonara’ to the squat, compact shape of the last few variants, and give this 10th generation model a distinctive new look.

So they sat on it, forcing the body to take on a sleeker appearance, longer and with a lower profile yet still with swoops and curves in all the right places. 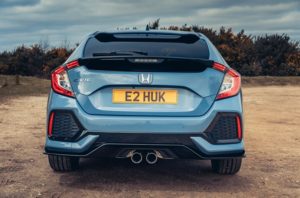 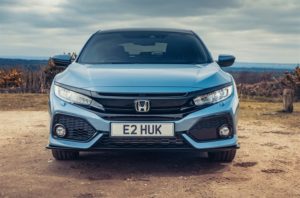 Honda say it’s been the largest single model development programme in their history and the result is a completely new car engineered from the ground up on an all-new platform.

With a 40 year heritage, Civic is very much a part of the motoring scene, sold the world over, and the objective with the new model has been to regain its spirit as a car with a distinctive sporty character.

Anyone who’s ever owned or driven a Type R will attest to that trait and there have been other ‘lesser’ Civics that have been capable to stirring the adrenalin.

Now the emphasis is on a sporty, more engaging driving position to go with the lighter, stiffer chassis that the new Civic is built on.

It’s now 30mm wider, 20mm lower and 130mm longer than the five door it replaces, which helps to make the cockpit wide and fairly spacious.

All-new, and interestingly so, is the introduction of a 1.0 litre three cylinder VTEC Turbo engine to the range, which produces 129ps and 200Nm of torque, and never really feels like it’s going to struggle. Maybe with a family of five on board and loaded to the rafters with luggage it might need to draw a deeper breath, but two up cross-country it proved particularly adept in all conditions.

There’s that distinctive thrum you get from all three cylinder engines, but it’s fairly unobtrusive in the main and when you do work it hard, it just sounds like it’s working hard. The entry level SE 129ps manual has an on the road price of £18,335, and the range tops out at £27,295 for the 182ps Prestige CVT.

So, much more than just your average makeover for a Swindon built five door car that is to be a global seller. 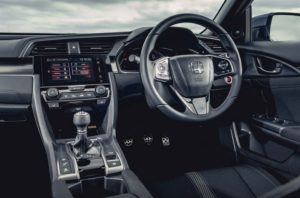 And with the accent on hitting the States too they’ve pandered to the American trait of throwing away the parcel shelf. In the rear you will find a roll out fabric shelf which can be fitted either left or right and which pulls across to hide the contents of the boot. The Yanks will probably bin them in their huge garages but in the civilised world it will doubtless be pressed into regular service. In any event, it’s a cost effective way of adding appeal for all markets.

From a ride quality point of view, it’s all change underneath as the new Civic switches to a multi link set up that seems to work very well.

The extra wheelbase really does improve the amount of interior space in the cabin, and with the fuel tank relocated the driver now sits a bit lower, which makes it more of an involving experience for the ‘keen’ motorist.

And there’s a new Type R version on the way….

FOR: comfortable, easy to drive
AGAINST: fiddly infotainment