TASTY food; sundry electrical goods; a rather large wall that can allegedly be seen from outer space – we’ve all heard of the Chinese.

Now they seem intent on copying some goods rather larger than your average smart phone. Cars for the European market are next on the agenda for the peoples republic and rest assured they will be, shall we say, competitively priced.

An initial foray from the eastern outpost of communism has seen the rather well known MG brand back in business here.

MG has a long history, founded back in 1924 but bought up by the Chinese when the British owned MG-Rover went bust in 2005. The MG reputation was initially built on the offer of an affordable people’s sports car, but that’s not exactly what we’ve got here.

What we have in MG’s new HS is a decent sized SUV that costs around the same as a compact SUV. One that won’t really stand out from the crowd of other SUVs on the road but which offers a decent amount of metal for the money.

Built on an all-new model platform and with a re-engineered 1.5-litre turbocharged petrol engine under the bonnet, the HS is intended to be a significant leap on from its GS predecessor and eat into sales of the SEAT Ateca, Nissan Qashqai and Kia’s Sportage.

List prices for HS are very competitive and hint at a decent saving over a like-for-like car when you compare the spec.

The cabin’s fit and finish in places smacks of German premium brand. There’s a lot of piano black and satin chrome trim, as well as piano key switchgear and turbine-style air vents around the cabin – a bit like something’s else’s interior in fact. But then the Chinese are legends at taking premium kit, and knocking it out for a fraction of the price to anyone looking for a bargain. 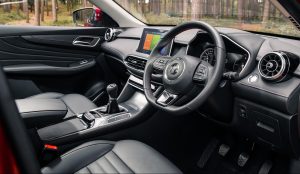 Inside you’ll find some neat soft stitched leather and a lot of ambient lighting, and you’ll be left feeling this is a car that looks and feels considerably more plush and luxurious than you’d expect for what you’ve just paid the dealer…..

It’s roomy all round, particularly for rear seat passengers who get plenty of knee and headroom, even with a panoramic sunroof fitted, and the boot offers some 450 litres of carrying capacity.

Sparkling performance doesn’t appear to have been factored in as part of the package which is a shame, because if you’re going to trade on the MG name and woo the punters then you maybe need a bit more than a fancy coat with not a lot to offer underneath.

The HS’s 1.5-litre turbocharged petrol engine starts fairly quietly and runs smoothly at low revs, and has plenty of torque to move it easily from low speeds. Press on though at it does seem to run out of steam a bit.

The suspension does a creditable job at smothering lumps and bumps and makes the car perfectly comfortable in everyday-traffic. 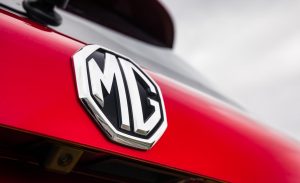 Our test car came with a six speed gearbox, but it proved a bit reluctant to let me use them all. First gear was frustratingly reluctant to engage on occasions, and even double de-clutching didn’t improved matters much.Hopefully just a minor glitch.

And then there’s the constant ‘bonging’ of alerts as you start up, which proved impossible to switch off and a trifle annoying. They’re part of a whole raft of safety features grouped together under the MG Pilot banner.

But overall, comfortable, spacious and surprisingly well finished. A full-sized and versatile family car that’s priced like an upmarket supermini – and one that comes with a seven-year warranty and plenty of standard equipment.