ANYONE considering adding a new Astra to their driveway, based on previous experience, is likely to be pleasantly surprised.

A car that has always been a firm favourite with we British motorists comes to you in 2020 in a form, shall we say, that is suitably enhanced.

The looks remain unmistakably Vauxhall‘s popular family hatch, but it’s the bits you can’t see where the most significant changes have taken place.

I’ve sampled plenty Astras over the years – some swift, some no so swift – and was always of the opinion that they offered buyers a fairly sound investment, particularly when it came to user friendliness. Roomy, adaptable, easy to drive – that kind of thing.

In the latest model they’ve managed to improve the handling balance as well as introducing new petrol and diesel engines that were being developed when Vauxhall became part of the PSA Group. The result is an all alloy 1.2 triple cylinder unit with either 108, 128 and 143bhp, plus a 103 and 120bhp diesel. 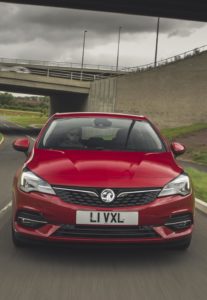 Here we’re sampling the torquier 1.4 143bhp petrol. It has excellent throttle response and obviously comes with that distinctive three cylinder thrummy engine note. It sounds at first as if the bits under the bonnet aren’t connected up in the recognised pattern, but that’s just the nature of the beast.

It’s paired here with a new nine speed automatic which is stepless so you don’t perceive any upward or downward changes.

They’ve managed to improve the car in lots of areas and it now drives just as well as any other hatchback that it’s ranged against on the market.

It’s got a great, well-planted feel on the road and is sure-footed to drive, displaying all the necessary attributes you need for safe 21st century motoring.

Good driving dynamics and a distinct shift upwards in overall quality will click Vauxhall’s compact hatch up on the radar of far more motorists. 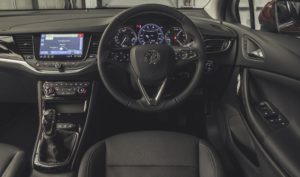 A quick glance will give you the impression of a decent sized car – which it is. There’s a commendable amount of front cabin space, and those in the rear aren’t unnecessarily cramped either.

In the main Astra has been a fleet car but still has been a sensible choice for the private buyer. On this latest version, the steering has been tweaked which helps a bit with its agility and makes for a smoother ride.

Three infotainment systems are on offer, all compatible with Apple CarPlay and Android Auto, and there are a host of extras available on top of an already decent specification..

Years ago I was a dissenting voice in the regular office debate over Escort v Astra.

Nothing wearing the blue oval swayed my opinion and just for good measure, I thought the Astra was neater looking too. It still is.