NOISE. The defining attribute of a true sports car. And there’s no getting away from the fact that you can’t have one without the other.

If, on the other hand, you relish the prospect of your ears being assaulted by the sort of noise that shouts performance – lots of it – at you, read on.

Because that’s the overriding memory of a week with Whitley’s finest. Style and comfort are a given, but the sound that blasts out of the big chrome tipped central exhausts (105mm wide EACH) leaves you in no doubt about the F-TYPE’s credentials. 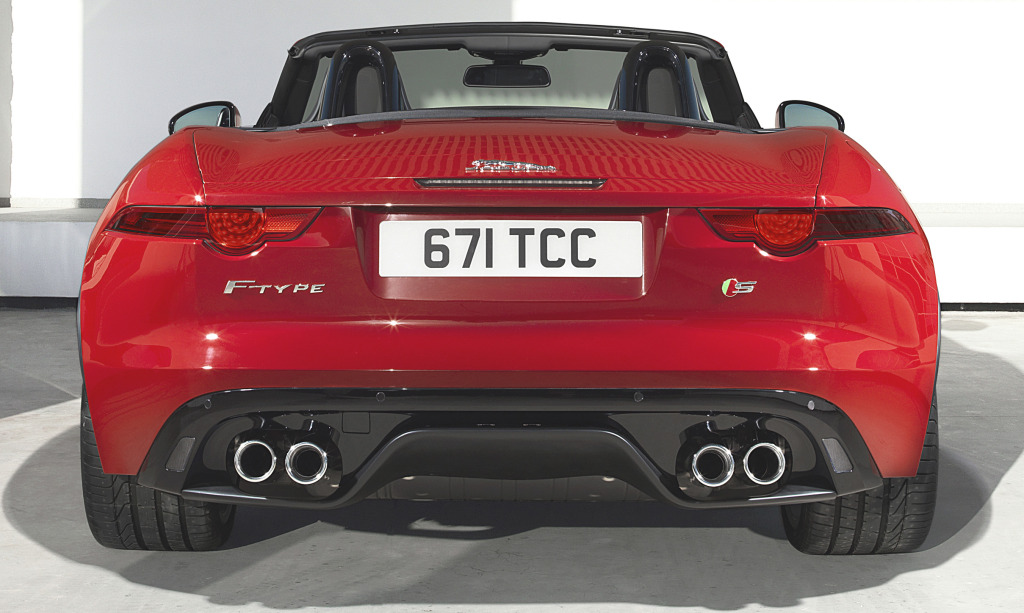 The active exhaust system that’s standard on the S and V8 S models adds another dimension of driver-enjoyment – and anyone else in close proximity for that matter. Valves in the exhaust system open under load from 3000rpm which allows the exhaust note to build to a thrilling crescendo at the red line.

Not that the front engine rear wheel drive F is an unruly beast – it’s the ultimate epitome of style when you’re ambling round in the traffic but when you want to motor, then 60 comes and goes in just 5.1 seconds (340PS model) which by anyone’s measure is on the swift side of the scale. The V8S does it in 4.2.

Its gear to gear acceleration is simply stunning and the shifts through the six speed automatic box virtually undetectable.

Seductive, powerful and elegant sounds like a fair description of everyone’s favourite Bond girl. But then Bond girls don’t come leather faced (unless they’ve been out in the sun too long) so let’s switch the analogy to the latest in Jaguar’s fine stable of cars. Which does come with its fair share of leather in a very well fitted out cabin that’s so low you literally fall into it.

It’s a return to the company’s heartland: a two-seater, convertible sports car focused on performance, agility and driver involvement. The F-TYPE is a continuation of a sporting bloodline that stretches back more than 75 years which brought us some of the most beautiful, thrilling and desirable cars ever built.

All engines drive through an eight-speed ‘Quickshift’ transmission, a centrally mounted SportShift selector offering full manual sequential control, as do the steering wheel-mounted paddles, with which you can force a cacophony of crackles and spits from the exhausts as you change down.
Its torsional and lateral stiffness make the best of the F-TYPE’s handling agility. Around that rigid aluminium structure, every system – steering, brakes, powertrain – has been honed to respond to your inputs.

There’s a hidden rear spoiler which raises at speed in order to balance front and rear lift. The spoiler raises at 60mph and then lowers to fit flush when the speed drops below 40mph. You can’t miss it in your rear view mirror as a big Jaguar logo is clearly visible when it’s up and working.

Neat touch: the door handles flick out for entry but then slip back in line with the sleek body as speed builds up.

Odd touch: I don’t think I’ve every driven a car where half the buttons on the steering wheel don’t have any assigned task.

Docile purring pussy or growling tiger that takes off like a Saturn 5? An interesting choice.