ENGINE in the back, rear wheel drive – sounds like a recipe for something a bit different.

But if you’re thinking along Porsche lines here, forget it. For this is the set up of the new Renault Twingo. And a Porsche pounder it ain’t.

What it does do, though, is up the stakes in the city car class, and it has a large dose of undoubted chic to woo buyers with.

Her indoors lost her heart – well, a bit of it anyway – to the original Twingo while we were holidaying across the channel in the last century.

The perky little Twingo was a refreshing change from the norm, but sadly, apart from a modest few imported by someone deep in the Welsh hills, it was never put on sale in the UK.

For while Renault’s original Twingo revolutionised the small car market with its futuristic monospace shape, they deemed the cost of right hand drive conversion to be a price they weren’t prepared to pay for what they felt would be modest sales here. A case of the old Agincourt archers, if you ask me.

Since 2008 we’ve had a Twingo on sale here although not the cheeky little original with its unique looks – more a ‘same as the rest’ city car sized offering.

But cheeky looks are back in at Renault. And what used to be a fairly bland city car has suddenly become a chic and quirky supermini with real character.

It’s a car that knows its place, and with a modest 70hp from its 999cc engine, that place is in the nearside lane on the dual carriageway, spreading bonhomie to passing motorists. It’s got plenty zip but lacks a bit of zap, so while progress round town is fine, it has to work hard to get up to speed on the motorway. The tell tale is the fact the speedo is only calibrated up to 90mph.

Where things get a touch more interesting is behind the wheel of the 900cc three cylinder turbocharged version, which display a bit more joie de vivre and is significantly more responsive to your right foot. In this one the speedo goes up to 130 – a bit optimistic but it hints at more on offer.
The engine is neatly tucked away beneath the boot floor.

There’s no reason to be cramped inside, and legroom, for a car of such compact dimensions, is good. The seats feel like they sit higher up than many but that in part is due to the relatively low window sill, which equates to a good glass area with plenty light getting in. 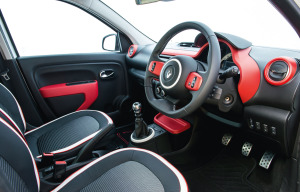 And it’s generally good all round visibility, coupled with its compact dimensions, makes it easy to manoeuvre and park around town. Seats are comfortable, but the fact the front ones have built in head rests somewhat restricts your view back over your left shoulder at junctions, so watch for that. That front passenger seat can fold flat so you can make the trip to Ikea and know you’ll be able to get a 2.3 metre long box in there.

Steering is precise, handling light and agile, if a little prone to body roll when pressing on. Some might find it a little firm on bumpy roads, but round town it settles down. 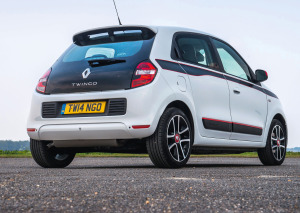 Check out the glovebox though. Our test car came with a handbook printed in its country of origin, which isn’t France. That made working out how to un-ravel the initially complicated opening instructions for the bonnet a bit of a challenge.

Like the original, there’s a lot to like about the newcomer, from the ultra modern yet simple layout of the interior with its smart central instrument binnacle and large digital readout, to the secure feel you get behind the wheel.

Not so much as case of ‘je ne sais quoi’ as ‘regardez moi maintenant!’