‘ARE you sure that’s a Golf?’ mused one weekend visitor.

He had a point but as it says Golf on the hatch lid then we must treat it as one, even though after that comment I began briefly to look on it as a shrunken Touran.

Based on the standard Golf hatchback, it gives you more space and a bit more versatility.

Initially it’s a pleasant change to get into something that hasn’t had switches and buttons scatter bombed all over the steering wheel. The Volkswagen Golf SV here is such a car. But then after a few miles your thoughts turn to the price – £22,000, give or take a couple of quid – and you begin to wonder if you’re being short-changed in some way. 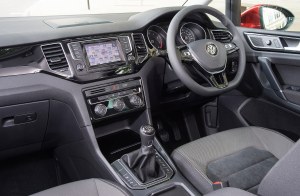 S spec is the entry model and obviously higher up the range the parts bin gets more comprehensively raided for the toys we come to expect these days.

What you do get is entry level adequate – a colour touchscreen, DAB digital radio, aircon, a post-collision automatic braking system, child locks in the rear doors, front and rear electric windows, a multifunction computer and a variable boot floor.

What you don’t get, somewhat surprisingly, are alloy wheels. It comes with 15 inch steel wheels with full size wheel trims, which don’t look half as good.

The Golf SV, which went on sale in the UK in May this year, pulled in an impressive accolade at its first towing outing, claiming class honours at The Caravan Club Towcar of the Year awards 2015.

Summing up, the judges said: ‘Our Golf SV had Volkswagen’s lovely DSG gearbox mated to the strong 150 PS TDI engine which eagerly completed composed laps of our test circuit towing a caravan weighing in at 1,268 kg, showing no weaknesses to its rivals. The SV is also blessed with a large area of glass, resulting in excellent all-round visibility.’

So if you tow your holiday around behind you at busy times of the year, this could be the car for you.

If you don’t, don’t dismiss it out of hand, because it carries a lot of Volkswagen DNA (as well as your family). It’s over 13cms longer than the Golf Plus it’s replacing but just over 22cms shorter than the estate version.

Even so there’s a lot of interior space to be put to a variety of uses. Rear seating is a 40-20-40 split bench which can slide forwards and backwards to increase either passenger or luggage space. It has a 500 litre capacity with the back seats in their rear most position, 590 if you slide the seats forward. Drop them down and you’re looking at a load area of 1520 litres.

And if a long load is waiting to be picked up, you can get it in by folding the front passenger seat, as long as the load’s no longer than 2484mm.

That VW DNA is evident in the fit and finish inside, where you’d be hard pressed to find anything to be picky about.

On the road, the 1.4 TSI engine fitted here with a seven speed DSG box provided adequate performance, and you get a good view out from the slightly higher seating position and the largish glass area.

Bluemotion technology is standard on all SVs so you get stop/start and battery recuperation, helping to save fuel and reduce emissions. An electronic parking brake with auto hold function – handy when you’re stopping a lot – is also standard, but it has the habit of making moving off again a bit of a jerky experience at times.