BACK in the mists of time, I can recall sampling what was then the latest Volkswagen Passat – and getting the fright of my life.

Moving the seat back to get a more comfortable position behind the wheel, I was suddenly aware that I was rapidly getting closer to the boot than the dashboard. ‘Dear God’, I thought (or something like that….) they’ve forgotten to put stoppers on the end of the seat runners.

At that time the only other sort of car you’d be privy to that amount of room in would have had a driver up front, with you in the back being chauffeured around with the ice cubes gently tinkling against the glass as you sipped your G and T.

So for a family car, the Passat kind of broke the mould. No longer was there a need to shoehorn the kids into the back seat – everyone had more than enough space for the journey.
And that’s very much still the case.

Only the all-new eighth generation Passat unveiled to the UK press last week has moved the game on a bit further. 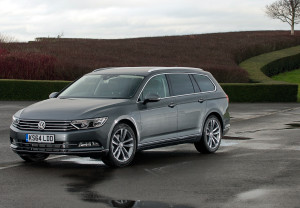 The bad news is that if you’re a petrolhead, you’re currently off the radar. Only diesel engines are available in the UK at launch (all EU6 compliant), ranging from the group’s excellent 120ps 1.6 litre, through two 2.0 litre units (150 or 190ps) to the range topping 2.0 bi-turbo with its 240ps, DSG box and 4MOTION four wheel drive.

On the horizon (October to be precise) is a plug-in hybrid GTE version with a 1.4TSI petrol engine and electric motor, while a frugal BlueMotion model arrives in June just ahead of an Alltrack estate version in July. 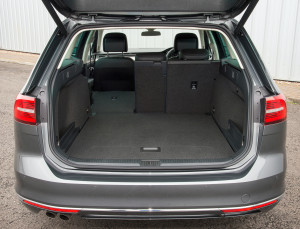 Five trim levels are available – S, SE, SE Business, GT and R-Line. With all of them you get a healthy list of standard features.

They include a Post Collision Braking System on all models, and on SE and above you can expect to find Adaptive Cruise Control, Driver Profile Selection, Ergo Comfort seats and front and rear parking sensors.

With over 22 million sales worldwide since the name first hit the brochures in 1973, you can’t say Passat hasn’t been a popular addition to the range.

And it’s set to bring us a few new toys in its repertoire. Later in the year they’re going to introduce Active Info Display, which will replace the traditional instrument cluster with a fully configurable interactive 12.3 inch TFT display.

And Trailer Assist will help manoeuvre said equipment with ease as the system automatically steers with precision. The driver only has to accelerate and brake, a technique that will have the purists among the caravanning fraternity sneering in disdain….

You’ll have to go a long, long way to find an automatic box that works better than VW’s DSG unit, and it certainly fits the bill here, providing smooth and barely perceptible changes when linked to the top of the range 2.0 litre bi-turbo.

The more modest 1.6 has a fair attempt at moving what is a large car around at acceptable pace, but it does need a fairly judicious stab on the throttle to build up momentum.

In the handling department, there’s nothing to cause any undue worries. It feels safe and predictable with no sense of impending doom if you make sharp steering inputs.