EVERY car has a beating heart – and none more so than Audi’s latest TT.

It’s a car that has been successively honed and improved since its debut in 1999 as a real jaw dropper – so much so that there was a hefty trade in left hand drive models from abroad for those who couldn’t wait to get behind the wheel.

And now, when you switch off and prepare to leave what is one of the finest cabins around, the silence is broken by a trademark heartbeat sound as everything powers down – ready for your next foray behind the wheel.

Audi’s original TT was the kind of car you might see in a schoolboy’s drawing book. Short and squat, with a rounded, bulbous front, the sort of sports car small boys dream of.

And big boys too, for that matter, because since making its way from concept car to full production machine in 1999, it has sold in healthy numbers for the German manufacturer.

Think back to the original roadster and its leather baseball inspired stitching in the cabin and you had what was an OTT TT. 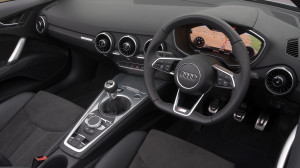 Now, by anyone’s measure, the all new TT roadster is a stunner when the electric powered soft top is up or down, and turning it from its snug weatherproof state into a sassy roadster takes a matter of just 10 seconds – and you can even do it at speeds up to 31mph if you get caught out by a sudden squall while in traffic. All at the touch of a button and when down, all neatly stowed flush with the body.

The multi layer fabric hood – something Audi has remained loyal to – certainly keeps you well insulated from the elements. 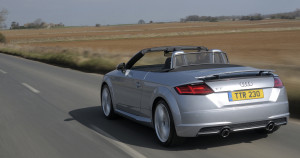 So much so in fact that it’s the sort of car you can live with and use day by day, because the boot, while shallow, is surprisingly roomy. A couple of modest cases, a few sacks of Tesco’s finest – your choice. 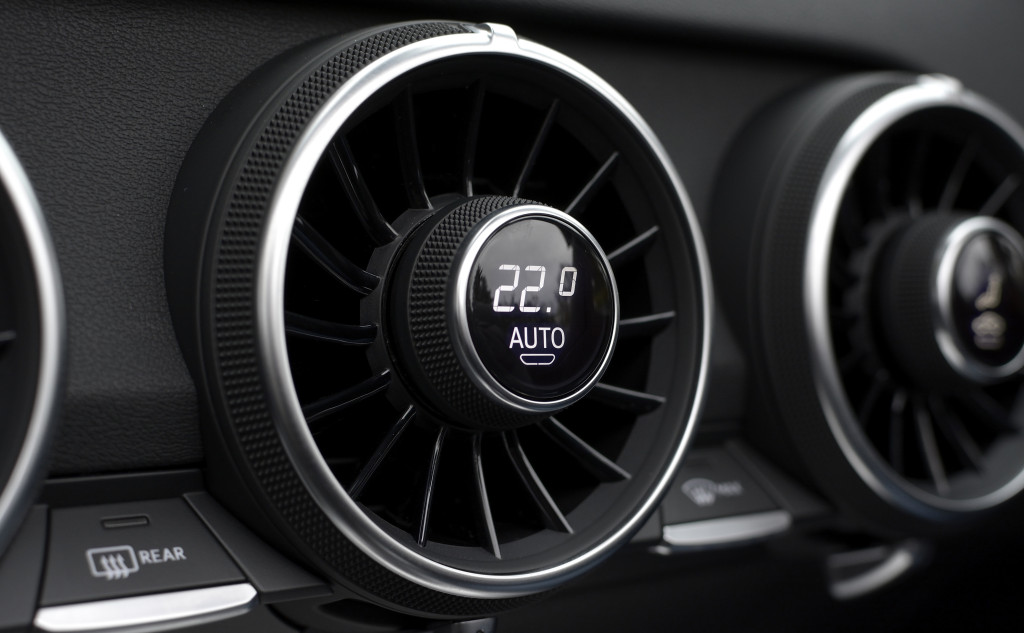 There’s no skimping when it comes to an Audi cabin and it remains one of the best around for fit, finish, and overall quality – witness the detail that has gone into the five vents that dominate the dash, all looking like the intake of a jet engine and cleverly housing essentials controls in their centre for the air con, fan speed, temperature and optional heated seats – kind of essential for top down UK motoring most of the year. 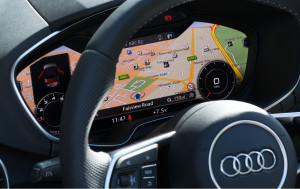 TT comes with the Audi virtual cockpit, which is based around a 12.3-inch, high resolution LCD display that completely fills the driver’s instrument binnacle  and replaces the traditional analogue dials. You can choose between two display modes: In the classic view, the speedometer and rev counter are in the foreground; in “infotainment” mode the virtual instruments are smaller.

The space that becomes free as a result provides ample room for other functions, such as the navigation map.

A progressive steering system is another technical highlight – its rack is set up in such a way that the ratio becomes more direct as the steering wheel is turned, enabling the TT Roadster to be steered precisely with little movement of the steering wheel in urban traffic and on winding country roads.

It helps to give you the feel that the roadster is firmly planted on the road and takes changes of direction and corners in its impressive stride despite being the baby of the range and only having front wheel drive, while others are quattro equipped. Grip aplenty makes it a rewarding car for a cross country trip.

And with 60mpg plus economy flashing up on the display it’s a small sports car in which you really can have your cake and tuck into a Desperate Dan sized slice of it.

There’s no denying its style and image. It feels every bit as quick as it looks, hence it’s continuing desirability.

Top Tip: Drive it with the roof down whenever possible. Otherwise there’s no point buying one, and you’ll have to contend with a huge blind spot if you have to look over your left shoulder at a staggered junction.