A DECADE ago, the thought of spending over £30,000 on a SEAT estate car would probably have seen you laughed out of the pub.

But now that pipedream has become a reality with the new Leon X-PERIENCE, a four wheel drive version of their smart ST, a car that is roomy, practical, a good drive and reasonably cheap to run.

So adding four-wheel drive makes it an even better proposition for those living in parts of the country that are a bit wet/muddy/slippy/slidey in winter. As well as offering a bit more on-road reassurance for the rest of the year. 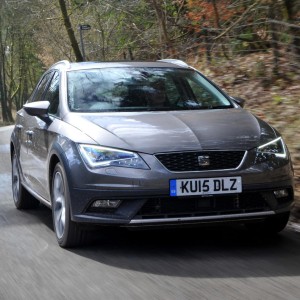 In the Leon, a new, fifth-generation Haldex clutch sends drive entirely to the front wheels in normal use, but up to 50 per cent of it is diverted to the rear axle when it’s deemed necessary.

With a ride height raised by 15mm and a 28mm improvement in ground clearance, the X-PERIENCE has moderately useful off-road ability and a towing capacity of up to 2000kg (manual gearbox).

And because it’s the same shell as the standard ST the boot still offers a healthy 587 litres of space. 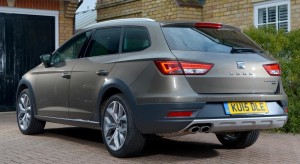 The four-wheel-drive system and beefed-up bodywork adds more than 120kg to the kerb weight and first impressions leave you thinking it’s a heavy old thing to move around. It feels tight, but a couple of extra trips leave you realising it’s not much different than the standard ST to pilot – a negligible amount of extra body roll but that’s about it.

The steering errs on the side of light, but there’s a bit more feel to it as the speed builds up. And that lightness of touch has its benefits when it comes to parking the ST. 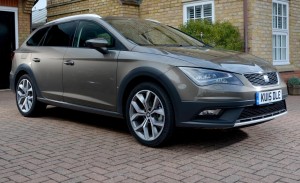 On an uncrowded motorway it’s a relaxed cruiser without too much wind noise to bother you, and its 2.0 litre diesel engine has more than enough mid range oomph to get past other traffic swiftly and safely.

Happily the interior remains unchanged here, so it is as practical as that of any Leon in the range. Neat and functional, and while not yet up to Audi standards, it’s better than a lot of others by being subtley smart.

So, a spacious family estate that’ll do muddy tracks and the occasional damp grassy field with relative ease. A step up from your average family estate.