IT’S a touch concerning when you start up your Kadjar in the morning to be greeted with a message telling you that the air quality is ‘very polluted.’

Speaks volumes about living in fairly close proximity to a major grid road in Milton Keynes as the traffic stops and starts its way into the city. And it also says a lot about the times we live in.

Happily the display settles down as you head into open country. “Good’ can appear at these times, unless of course a local farmer is spraying the outpourings of chickens bottoms onto his fields, in which case it’s hold your breath and hope for the best. 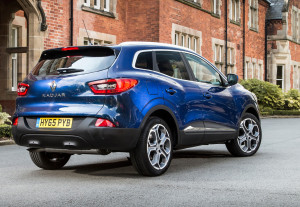 Renault’s Kadjar (I had to look it up – it means not a lot. It was dreamed up by someone at Renault who’d had too many Ricards at lunch) is in essence a French Qashqai – a name which does means something as it comes from a desert dwelling nomadic tribe in southern Iran.

But let’s forget the name for a moment and concentrate on what is a pretty damn good all round family car.

Kadjar is a late starter in what is a very crowded and competitive sector of the market. But it might attract more than a passing glance from many as it’s a good looking machine, and if you bother to open up the boot, you’ll find it’s got a pretty decent load area, with a few hideaway cubby holes beneath the floor. 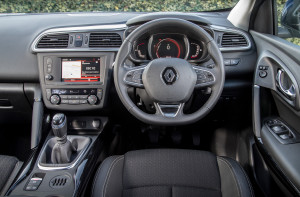 The instrumentation is neat and uncluttered with a big clear central dial that shows your engine revs, with the speedo set digitally in the middle of that. Very tidy, and flanked by a temperature and fuel gauge right and left.

The centre of the dash houses the seven inch touch screen which can prove to be a bit of a ‘poke it hard screen’, as initial contact isn’t always successful. It comes with a sat nav set up that has a small Kadjar image as a directional locator, instead of the normal arrowhead.

It’s unsettlingly swift off the mark, and hence not an easy car to drive smoothly on first acquaintance. It might only be a 1.6 diesel under the bonnet here, but with 320Nm thumping in at 1750rpm, fairly enthusiastic forward impetus is a given.

So is swift, safe overtaking, but initially it’s best to temper your enthusiasm for the general all round comfort of your passengers. It is relatively easy to make the front driving wheels lose grip from the off.

This very well equipped Signature Nav dCi 130 model (£24,795) arrived with a six speed manual box, where an automatic might be a more settling influence on the package.

The view forward from the drivers seat is dominated by a wavy line that greets you as your eye moves from left to right, taking in the curves of the wings and a sweep of the bonnet.

Annoyingly the only control light in operation on the door panel was for the drivers window – none of the others were backlit.

And why do Renault still insist on locating the audio controls on a stubby stalk directly behind one of the fat spokes of the steering wheel? I concede you shouldn’t be spending time looking at it, but controls on the wheel itself, where a quick glance in all you need for confirmation, would be a step into the 21st century.

Otherwise, definitely one to consider.