A competent little car in the past, the main bugbear being that while you could load it to the gunwhales, they were pretty compact and bijou gunwhales.

How they would have loved the new middle age spread and slightly porkier C3 you can exchange your cash for. 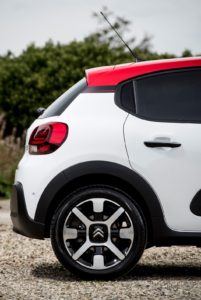 Much more interior space, a build quality that hints that someone’s been down on the production line and kicked a few derrieres, and an overwhelming senses that here is – at last – a worthy wearer of that iconic Citroen badge.

A badge that is simplicity itself on a car that has all the modern day bells and whistles that buyers demand.
It bears the distinctive look of a shrunken C4 Cactus, because along its flanks are the airbump panels first seen on the aforementioned Cactus.

It gives the C3 a certain ‘je ne said quoi’. Actually, I do know quoi, because it’s a body shape that flows in sharp contract to some of the edgier offerings at this point of the market.

It’s got an aggressive stance – a trait the French normally reserve for the rugby pitch – yet inside it comes over all Lawrence Llewellyn Bowen, with tan strips round the steering wheel, the front edges of the seats and across the dash. Totally out of keeping with the cobalt blue exterior paint and its white roof.

It must be a French thing because following on from our recent review of Peugeot’s 3008 SUV, the power here is also provided by a three pot 1.2 litre engine with similar output and performance attributes. The C3’s turbocharged and intercooled unit which proves quite voluble under acceleration and also quite swift, you you have to work a bit on the correlation between clutch, throttle and gearchange to keep it smooth. Otherwise it isn’t, as the three pot can prove to be a bit too willing to impress at times.

Citroen has successfully built the C3 round one of its core brand values, and that is comfort, making the car a relaxed place to be on the move, even if it does body roll a bit. Even with that, it’s still worth considering by anyone who’s looking for a car of this size. 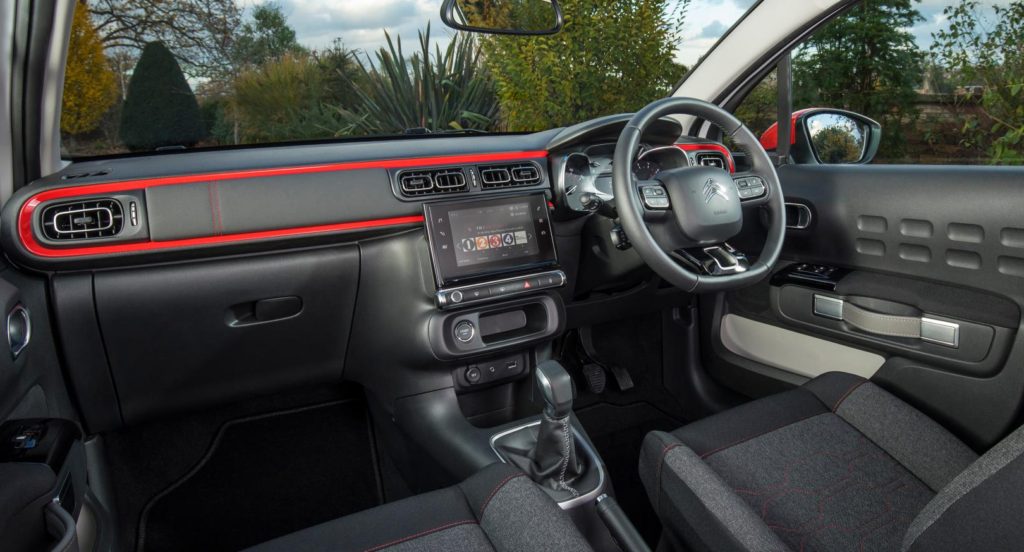 The C3 has been a staple of the supermini scene since 2002, but the latest C3 is definitely the best one yet. It’s light years away from its predecessors, sitting on its 17 inch diamond cut cross alloys as this one does.. The original C3 was launched back in 2002, and the Mk2 of 2009 vintage was an evolution of that car, and had a more upmarket interior than before.

When they set out to do something a bit different you can’t say Citroen don’t come up trumps. C3 is another car that’s the wacky offspring of a design team that put pencil to paper only AFTER a long liquid French lunch….