PEUGEOT pandered in the past to the French obsession with creating MPVs – cars that could transport Rene and his growing family around in a spacious and safe motorised environment.

But times change – and so have Peugeot. Now 3008 stands very much for a car of the 21st century that is much more SUV than MPV in looks and all round ability.

What we have here is a chunky looking crossover that has its own distinct stand-out look to set it apart from the mass market medium-sized SUVs that just about every other manufacturer has in its brochure. This one has a muscular presence that you’ll have to look long and hard to find in any other showroom and its high sides and smallish window area give it a sporty hint too. 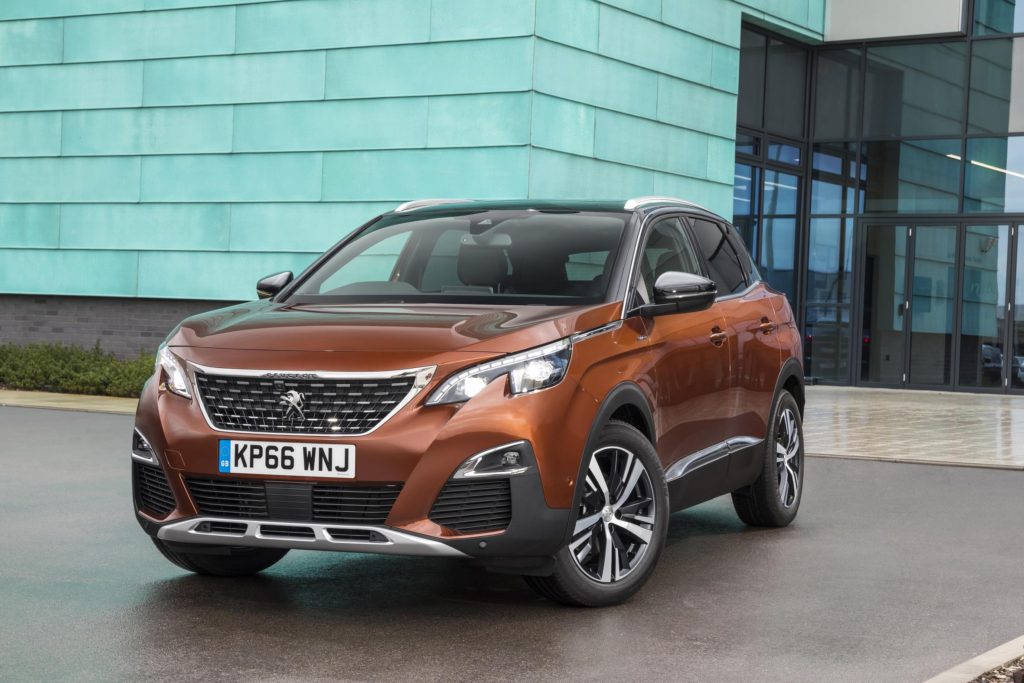 On reflection after a few days driving it, it’s maybe not the very best of the bunch but it offers a different experience.

A Marmite car if you like, because you’ll either love it or hate it. It’s the former for me, purely because it doesn’t follow the standard rules of engagement.

After all, who would think of pairing up an automatic gearbox with a three cylinder 1.2 litre engine, plonk it in a decent sized body weighing 1270kgs and expect it to perform?

But perform it does and in a perfectly acceptable way. With 131hp and 230Nm of torque, 3008 is surprisingly good at keeping up with morning and evening traffic movements, and is so subdued and well damped from a noise point of view that you have to be seriously assaulting the right hand pedal to elicit any raising of the decibels from under the bonnet. 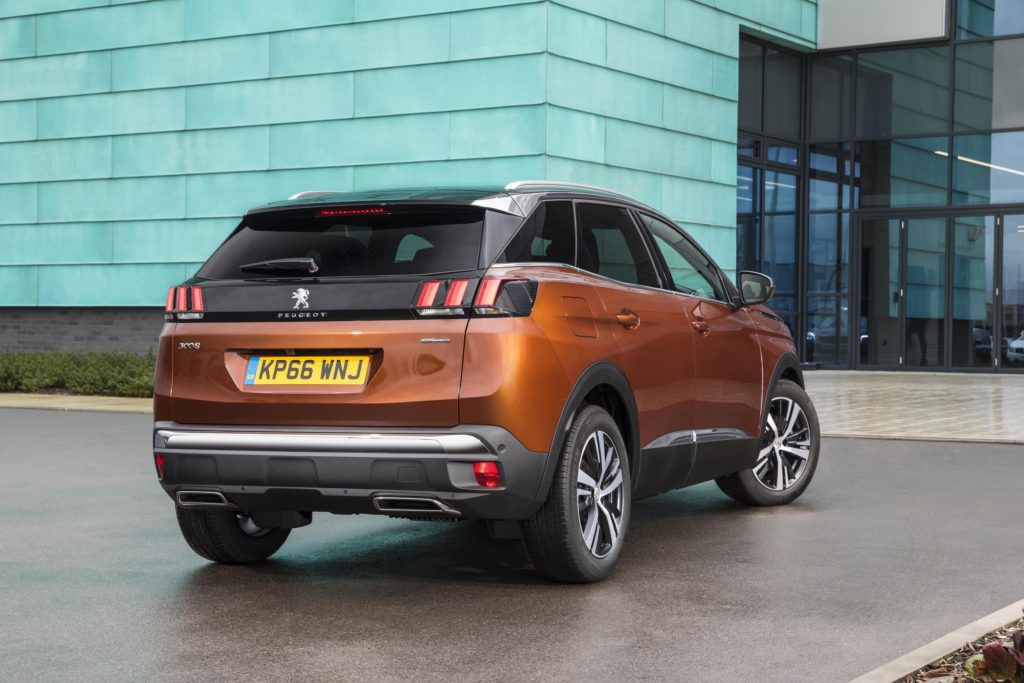 Alternatively, you could depress the sport button – that helps to ramp it up to a level that suggests fun is in close proximity. Unfortunately it also ramps up the emptying of the fuel tank – one of the perils of mating a small engine with an auto box. Things are fine if you’re taking it steady, not so easy to get near the urban 44.8mpg claimed if you’re not.

But don’t let that put you off, because in every other respect, the 3008 is a winner.

Its tour de force is the cabin, which comes equipped with Peugeot’s much vaunted i-Cockpit which has transformed the dash and control layout, The shapes of the dash and console are different and stand out, but not in a typically eccentric French way. There are two configurable screens, one for the driver’s instruments and the other for nav and entertainment. Their operation is smooth and logical, the choice of display a matter of personal choice, and their graphics clear and easy to read.

It’s similar to Audi’s Virtual Cockpit, and means you can change the layout of the dials, and show sat-nav directions directly in front of you. 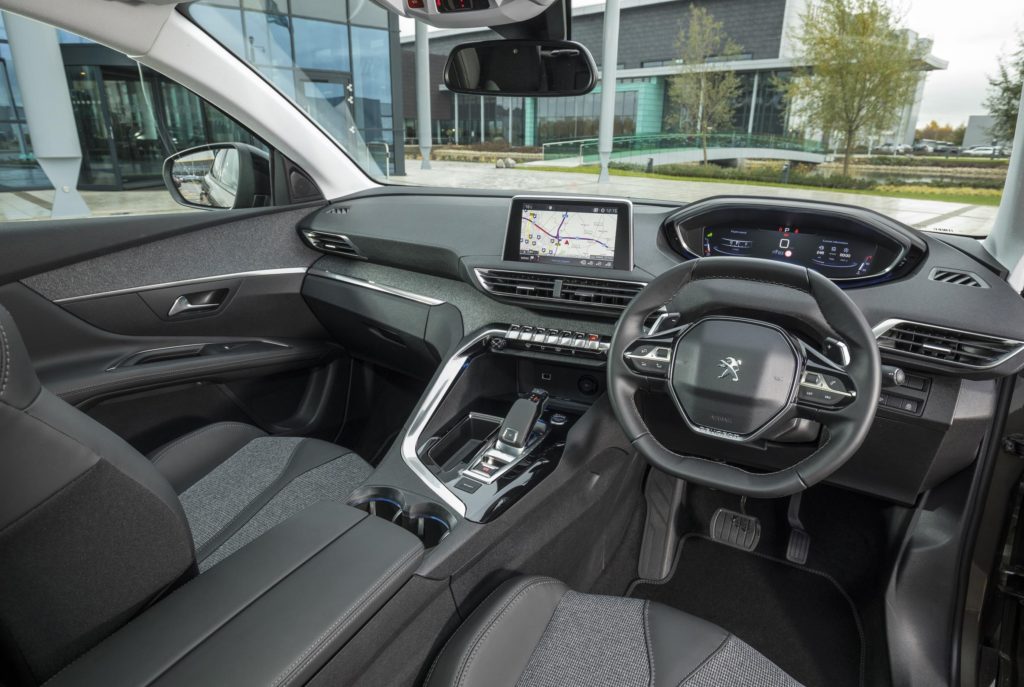 Peugeot’s trademark small sporty steering wheel sits below the 12.3 inch drivers main panel so there is no obstruction to your view of the display, but they’ve missed a trick here, locating the gearshift paddles permanently on the column when ideally you’d like them to turn with the wheel.

That three cylinder engine has for the second year running lifted the International Engine of the Year award. There’s no obvious turbo lag, and there’s plenty of power and torque at low revs. So it does what it says on the tin.

GT Line spec – one of the four available – comes with loads of kit, a black roof and some classy chrome trimming to the exterior, as well as door mirrors that dip down when you’re reversing and puddle lights in them that shine a big Peugeot logo on the ground.

A very worthy improvement on the MPV-orientated 3008 it replaces. It’s now better than ever and has to be as theirs is a whole lot of competition in this sector of the market. 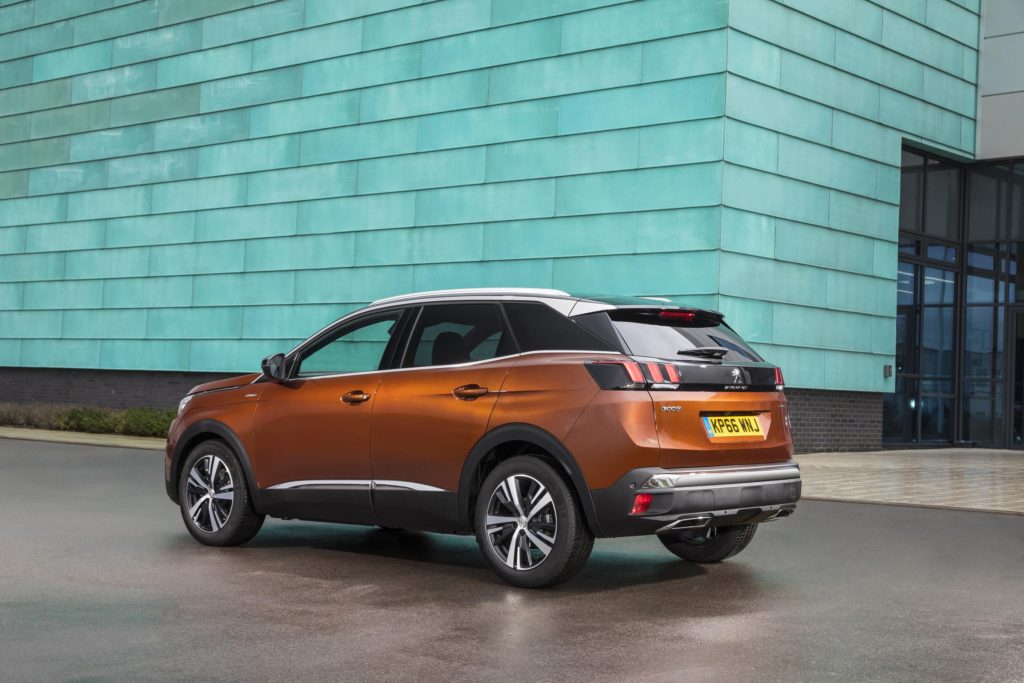