SUBARU’S Levorg GT is one of a kind – there’s just one version on sale here in the UK.

But it’s the spawn of a long line of Scooby estate cars, and charged with taking the brand into the 21st century as the successor to the highly useable Legacy, which isn’t a name you could run backwards.

But while Levorg reversed is Grovel, there’s nothing second class about this latest Subaru offering, which features a downsized turbocharged engine, a pretty decent cabin and the surefootedness that four wheel drive delivers.

Race fans will know the car is already being used to good effect in the British Touring Car Championship and has notched up wins – just like Honda managed when they campaigned a Civic Tourer in the same series a few years back.

The attraction to owning a Levorg is that much vaunted all wheel drive set up so loved by previous Legacy owners, but the car comes to the UK with only one engine and one gearbox: an all-new 1.6-litre turbocharged direct injection flat four petrol engine, which delivers 170ps and 250Nm of torque, and a Lineartronic continuously variable transmission (CVT) with an active torque split system, which helps to deliver smooth and fairly swift forward progress. It can sprint to 62mph in a fraction under nine seconds and romp on to a 130mph top speed.

It has the trademark Scooby power bulge on the bonnet, but not the gravelly bark of an Impreza to go with it unfortunately. It’s just too quiet. I even drove with the windows down but there was something missing. 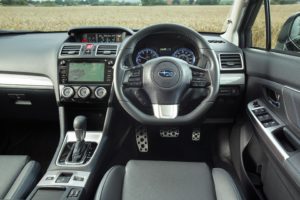 While the accent here is on agility, there’s also a fair old emphasis on comfort. The ride is good, body control well damped and the steering has a weighty feel that gives you confidence on a tight, twisty road. There’s no hint of the grip dropping off the cliff and at all times, in normal use, there’s that reassuring sure-footed feel, all in a more subdued and less aural experience.

It comes with lots of safety kit – overtaking alert on the door mirrors, lane change alert, lights that flash when you’re getting too close to the car in front too quickly, at which point the Scooby will apply its brakes. All necessary stuff on today’s congested roads. And build quality is up to Subaru’s usual standard.

Park your posterior in the blue stitched leather seat and all the dials and screens are close to hand and easily in view. The wheel is a mass of buttons, which must be quite rewarding when you finally work out what they all do, and even though the transmission is a CVT, there are paddles on the wheel should you feel the need to.

Rear seat passengers have plenty of head and legroom, while the boot opening is is a decent size and the boot serves up 1,446 litres of capacity when you drop the rear seats down.

In the UK, Levorg is offered in just one trim but with plenty of standard kit – 18-inch alloys, privacy glass, sports seats, keyless access and push-button start, dual-zone air conditioning, Bluetooth connectivity and cruise control to name the obvious ones.

FOR: all wheel drive
AGAINST: missing that Boxer beat